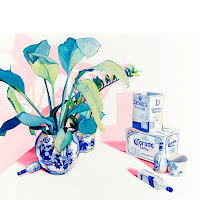 The team was back in Exeter this weekend and given Ecosse sits between two of our favourite landmarks (the General Store for lunch and the Train Station for train spotting with my 2 year old son) it was only natural that we would pop in to see what was going on.

Julian Meagher's solo show was opening this evening and there were already quite a few red dots before noon. You could see why as it was a really interesting collection of works that was priced attractively - most of the smaller works ranged from $1,400 to $1,900 with mid size works around $4,000 and bigger ones approaching $10k. I recognized Julian's work from some of the art magazines - it is fairly recognizable given he mixes Chinese pottery with booze such as Jack Daniels bottles or VBs. This show also included some tattoo paintings which looked good but I probably wouldn't put into the home collection as I don't want to encourage the kids to get any tough stickers. As a former doctor he had also included a skull which was inspired by his medical texts, one of the last of a series of skulls he has been doing, better get in quick for that one.
Points. 3 for the skull, which would suit anyone collecting the sex and death theme, perhaps Mona? 2 for any of the combo chinese vase / booze paintings; and 1 point for the team at Ecosse - they even have Sunday openings down in Exeter, how very Lower East Side of them!
Posted by Big Lamington at 3:26 AM