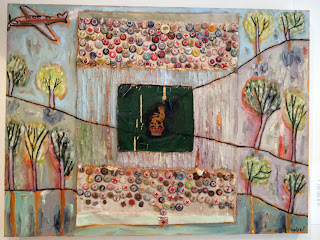 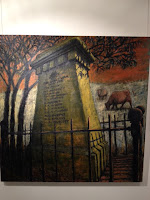 Points.  I will give 3 to Kerrie Lester.  Despite the fact that her work presents a few conservation issues (some of the badges are already falling off) I am a sucker for a collection of vintage ephemera.  The photo doesn't really do it justice, you need to see this in person.  I'll add my 2 points to the judges Highly Commended to Bill Nix for his Memorial (pictured left, yours for $7k) and give one point to Craig Handley for his budget friendly Cenotaph.  I'd usually post links to all the images on the Gallipoli Club website but it appears they are a little behind as of writing. Give it a couple of days and am sure you will be able to track down the show somewhere around here if you can't make it to the club before May 11.
Posted by Big Lamington at 4:00 AM