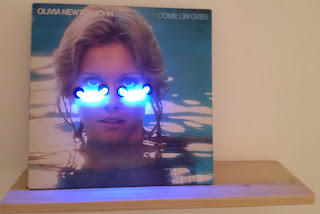 Okay - I realise this is a little late!  But I did want to put the 59th (and last) post up for 2012.  I could've made 60 but will defer Taboo until 2013.  This was a Christmas eve eve eve special to check out MOP and Galerie pompom before they (and I) take a long break. 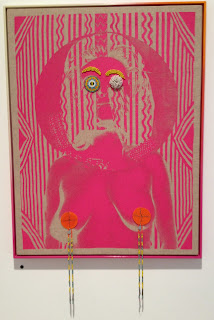 First up was MOP.  Here Sarah Contos (yes, more artists with websites, keep it up) has a show called 'My Eyes Through Your Mountains'. I really liked this.  I finally got around to reading the exhibition essay by Joel Mu (who guest curated the show at Alaska I quite liked) and it is pretty reassuring as even Joel makes the same titular links as I did.  Apparently Sarah likes working with images of old iconic Aussie performers, Olivia Newton John, Kamahl, Dame Joan Sutherland etc.  I didn't realise that the embellished screenprints (above 'Spring (DJS)') was actually meant to be Dame Joan, I think a little cut and paste job here.  There were 4 of these screenprints and only $650 each so a total bargain although I would struggle getting these breasts in the house, even covered up with bead tassels.  Family friendly was 'the bluest moon' (pictured top) which was neon on an old album cover.  Loved it.  And only $850?  I should've got her sooner ... and not spent my 2012 budget already!  Great work MOP. 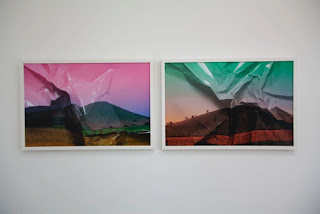 Next door at pompom was a good old fashioned group show called 'heaven or las vegas'. Which sounded promising but to me had nothing to do with the works on show, but that is kind of par for the course with modern curatorial practice so you barely even make note of it nowadays.  Here I quite liked Craig Bender's photos.  Especially the ones where he orients them a little squiff.  My favourite was a work called 'Ballad of the New World II' which was turned on its side.  Mr Squiggle eat your heart out.    I did like Vivian Cooper-Smith's works which appear crumpled and then re-photographed (instal photo of 'The sound of tomorrow 1 & 2' above).  Also appealing was Todd Robinson's funny sculpture of a pink balloon called 'he knows at any moment it may be lost in a vertical field'! Much better than 'untitled'.

Points:  3 to Sarah for her Olivia Neon. I want one. Did Melissa Tkautz ever release on vinyl?  2 points for Craig's side photo and 1 point back to Sarah for her collagey screenprints.  In my interpretation those were the mountains ...
Posted by Big Lamington at 11:30 PM