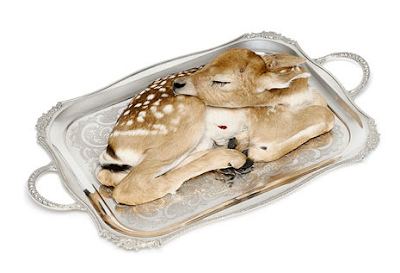 With the Mrs working a weekend, yours truly was the one at Council chambers with three junior critics racing around the exhibition on Saturday.  There was quite a bit to see, but helpfully you can see it again online here (and in the flesh until 10 November). 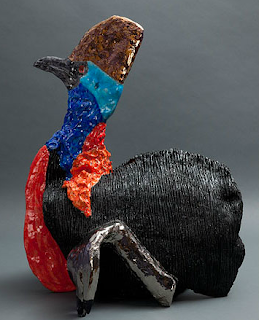 A couple of familiar names here, Joan Ross, Troy Emery and Peter Cooley all submitting works emblematic of their quite distinctive styles (Peter's Cassowary, above, was pretty cool if you like cassowaries. I do).  Likewise Julia Deville.  She is owning taxidermy at the moment and her 'Sorrow' (image top) of a stillborn deer sitting on an antique silver platter won the prize.  Her work is still priced competitively and its yours for $7.9k (or maybe not, is this prize acquisitive?  I can't remember).  I didn't recognise it immediately, but Donna Marcus has a work in her this year (Khrushchev + Nixon) that references her Big Lamington 3 point winner from 2011.  Other highlights included Dani Marti whose bead encrusted rope kind of made me think of an Angela Ellsworth (think pin bonnets) door snake.  There were quite a few works challenging the 80cm size rule, like David Jensz's plane space (79cm in 2 dimensions) and this large confusing wooden crib from some guy with a made up name.  What else?  Well I can't help mentioning Kirsteen Peiterse's Downpour.  Primarily because it reminded me of that random 80s kids TV show Fraggle Rock.  Those acrylic rods look just like doozer constructions.  Other prizes?  Stephen Bird and Michelle Ussher won Highly Commended's for their pieces and Uri Aeurbach won something called the Plinth Prize.

Points:  Loath as I usually am to actually agree with the judges verdict I think Julia gets my 3 points as well, well done.  2 points to Darren McGinn's Building Blocks (above) and 1 point to Abdullah Syed's woven dollar (if you follow me on tweeter you would have already seen this.  Damn, stop missing out on the fresh stuff!) which I really liked but am not so sure it wouldn't have been better just framed instead of being contortioned into flying rug for the rules of sculpture.  Well done Woollahra Council.  Good to see (some) of my rates supporting this.
Posted by Big Lamington at 9:21 PM