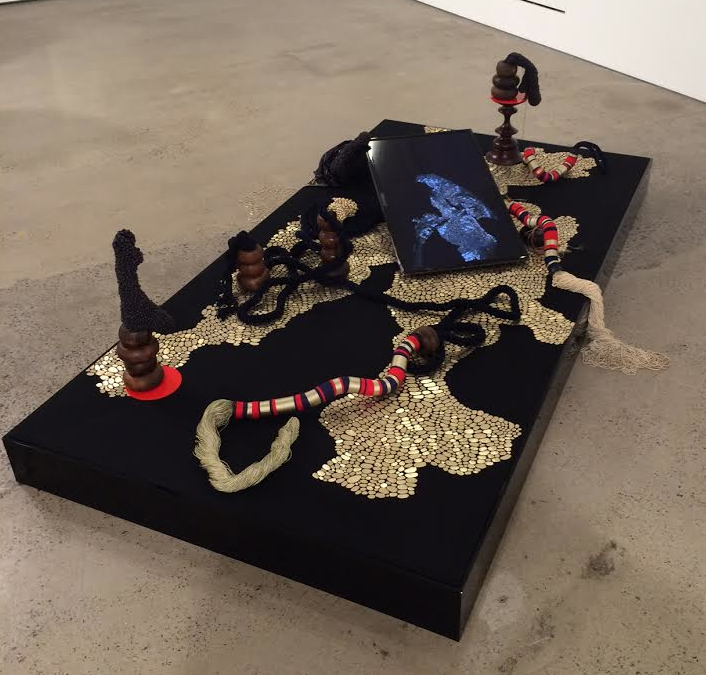 So after a few weeks of getting to exhibitions on their last day I thought I'd change it up and actually score a scoop.  It's the first day of the John Fries Award on show at the Galleries at COFA.  I am so early that they haven't even awarded the prize yet!  So without sway from the professionals, who am I going to give the kiss of death to ... 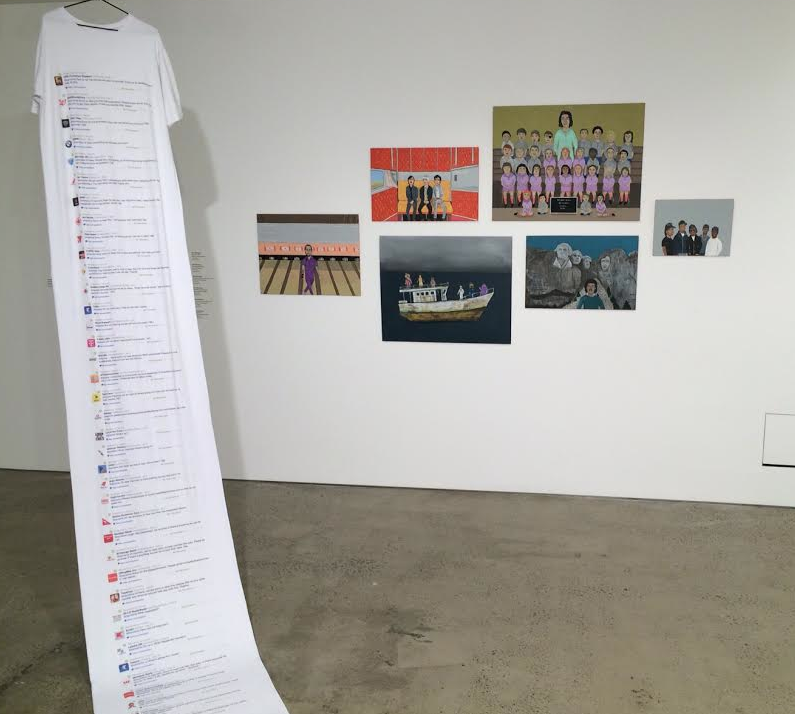 The Fries Award is for emerging artists, a category I really enjoy exploring.  I've seen this a couple of times and obviously there is a massive change year to year just based on the sample size of artists that make the cut.  This year I felt a strong institutional feel running through the show, but maybe that was just because I recognised two artists from the MCA's last primavera.  Two of the judges are from Alaska Projects and Artspace and their respective spaces aesthetic also showed.  I mean, I wouldn't expect to see George Egerton-Warburton's dirty dishes sculpture at a commercial gallery or displayed in a home but I could see it at Artspace! As a collector I found a lot of the work challenging.  But even as a garden variety art lover I struggled with some more than others.  Heath Franco is one artist I just really don't get.  Every time I see his work (and thankfully this had headphones so you could tune in or tune out, and I did for the full 3 minutes and 12 seconds) I always wonder what he is on, because he's not just high on life.  A lot of the video had me tuning out actually, I had to read the catalogue to see what it was all about.  Some clever concepts, like Justin Balmain putting a Woody Allen movie dialogue into a text to voice program and animating it with twitter emoji's. But in the gallery I was irritated by this monotone within seconds.  I just couldn't watch it.  The empty Seinfeld set with just the laugh track is the one that might've grown on me.  My top picks had a bit more analog about them.  Sam Hodges photos were great (image second from bottom, sorry about the title, I grabbed the catalogue it is incomplete as to titles!), although I remember he was in this prize last year and even highly commended?  Maybe this is his year.  Kate Scardifield is right up there for me.  Her work, "Garland (Objects and new artefacts)" (pictured top), was a colourful piece that took up a lot of floor space.  There was video in there and these very shiny braided objects that had a primitive look to them.  I was excited to see Jason Wing's name in the catalogue (I had flicked through his new book at Artspace the other day) and his brick installation intrigued me (pictured bottom, Xucun Village).  I think this is one that is definitely better in the flesh as the gold leaf on the bricks creates a very delicate pattern. I'm guessing it is a map, and I like maps!  Other picks were the naive acrylic works of Mark Etherington (pictured second from top, right hand side). He had some mixed references, Wes Anderson movies, the Big Lebowski, NWA, Lionel Richie.  I can't believe he has painted the Darjeeling Limited and not referenced the luggage, my favourite thing in that movie.  Another cool work was from Hamishi Farah (pictured second from top, left hand side) - the stream of tweets appealed to the twitter tragic in me.  Hamishi's work, 'Apologies', has all these twitter apologies from companies he has obviously punked.  All printed on an overly long t-shirt.  Now that is an alternative aesthetic I can get into.  I could even see it in a commercial gallery! 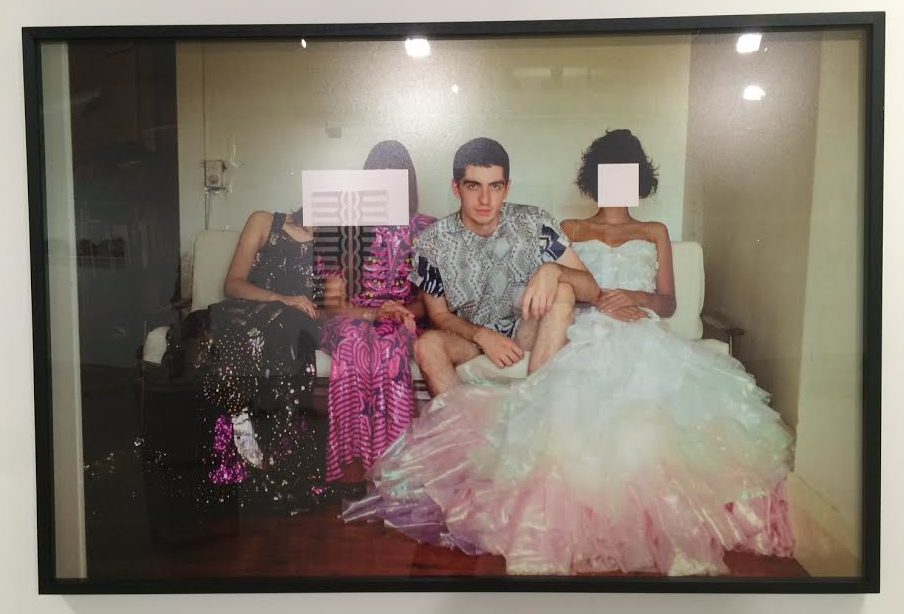 Points:  drum roll please.  My pick for the John Fries is Kate Scardifield, 3 points for you.  Runner up, and 2 points will go to Hamishi Farah.  The 1 point is tough, and coaches call I am going to give one to a couple of players that I couldn't split. Samuel Hodge and Jason Wing, 1 point each.  Now if I don't get a winner out of 4 picks I am going to be amazed.  Well, not really, as most awards are a bit of coin toss in the first place.  I'll come back in a couple of days with a postscript of the official winners*. 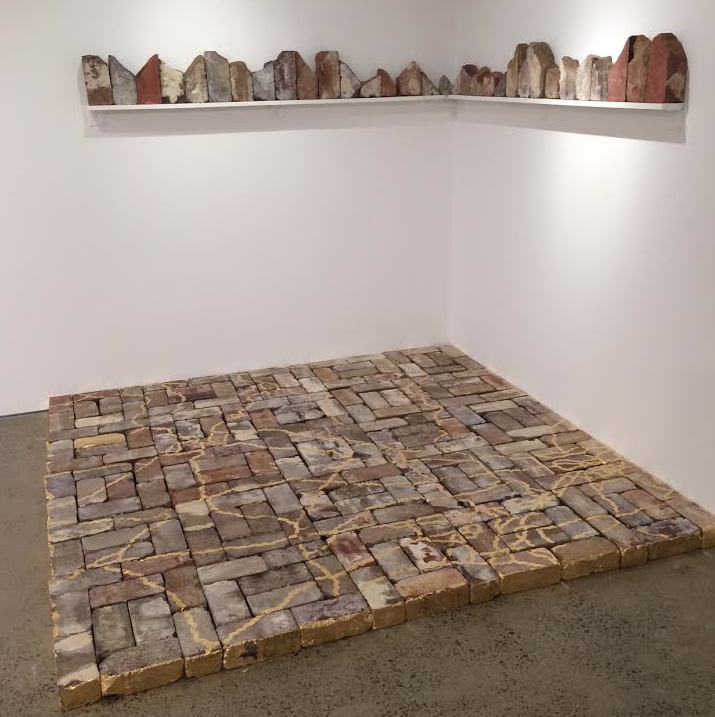 *Winner announced Tuesday 12 August.
Posted by Big Lamington at 1:54 AM