Garth Knight at Iain Dawson - 14 May 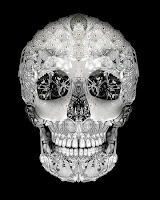 Second stop on Saturday afternoon saw the clan hit Iain's shop for a flying visit, the time constraint arising as my three year old art critic didn't think much of Garth's body of work and demanded we hit the playground instead. This was fine as I had seen some of these works at the Australian Centre of Photography in a group show earlier this year (that January show was much better than ACP's current one which is quite ordinary for my money). I did find a few things that would give the slippery dip a run for its money ...

The jewelled skull was probably the pick of the crop back then for me - very Damien Hirst (a very small print of 'for the love of god' graces our stockroom). Looking around his current show I am not sure anything was going to beat that image. Garth looks to be a master of photoshop - manipulating images of jewellery into all these different forms. I was disappointed that these were all so big - of the 16 images only 2 had both dimensions under 100cm and 11 had both dimensions bigger than 100cm, the biggest was 100cm x 225cm. I remember reading a few years ago a NY dealers advice to artists to make photos big because they sell well. From the last few photo shows I've seen it looks like this advice is now universal. The skull looked the most popular with the punters with quite a few red dots on this edition of 10 (125 x 100cm - $3,750). Iain's website says there is a smaller skull on offer, this is still 75 x 60cm, although I wouldn't mind a 30 x 25cm - I think it would still work. The bigger stuff was up to $4,600 which is a lot for a photo but the room sheet says these are all c-prints, and not that I know all that much about photos but a c-print usually means a real old school kodak style chemical print rather than a digital print or giclee which means a big colour printer.

Points - 3 for the jeweled skull, I'd consider playing this off against my Hirst print if they were of similar size; 2 for the beetle, which is the buy of the show at only $1,800; and 1 for the honey bee which was one of the bigger works but did justify its size with the details in it. You can see the whole show here
Posted by Big Lamington at 8:49 AM