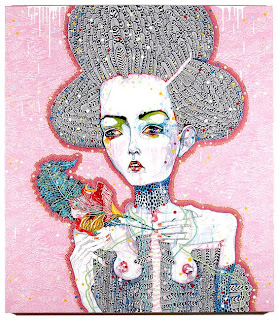 Saturday morning tea at RoslynOxley? Sign us up. We were reasonably familiar with Del Kathryn Barton's oeuvre from the Archibald (she won it in '08 and had Cate Blanchett in this years) and a previous show just up the hill at the old Kaliman gallery on Sutherland street. This show was quite impressive and we had the added benefit of an artist talk to provide a little additional context to the small essay and big prices in the accompanying room sheet.

Ms Barton's style is very distinctive. Instantly recognizable in a room. There were 8 large (160cm x 140cm) pieces all called 'satellite fade out' which references the dot painting technique of hers (all $28k), a couple of larger works ($32-35k), one very large diptych called 'for the feeling' (yours for $110k) and there was a salon wall of 11 smaller drawings (each $5.5k). All of the larger pieces had these model style female heads, elaborately coiffed (feathers rather than hair), mostly with their nips out (and usually more than 2! On a $ per nipple the diptych was a bit of a bargain given the 2 subjects in this one had 8 between them). The essay said there are two things we can know about these subjects, one was that they "belong to the mammalian class or are mammalian-like, maternal nurturing evidenced by their breasts - of which there are many". The Mrs preferred the more demure ones thinking our walls already have too much explicit content. Colour wise, I thought the 2 pink ones stood out the most, the blue ones were interesting but probably not as strong as the black (all had lots of colour over this background). When you can sell out a room of over $450k of art prior to the preview night you can pretty much lay claim to being a well established artist. I thought it a little strange therefore to hear the artist list Louise Bourgeois as a strong influence given her own style is so distinctive ... and not really reminiscent of Bourgeois at all. But I guess listing influences makes it all sound a bit more serious.

Points - 3 to 'satellite fade out 3' (pictured above), this is one of the pink ones. I think I liked it as the satellite fade out technique really brought a big pink lamington to my mind. 2 to 'satellite fade out 6' and 1 for the big diptych (and hats off to whoever has the space and cash to display that 240 x 360cm work). I bet RoslynOxley is pretty happy with signing/poaching of Barton. The AFR just listed her in saleroom this Thursday as being one of the most recession-proof artists at the moment, and given I heard the book for this was 3x oversubscribed I'll believe it. Let's just hope the prices don't rise before the next show as the Mrs. would like one and I need to save my shekels ...
Posted by Big Lamington at 4:30 AM