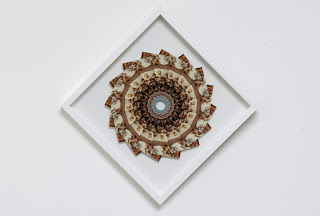 Hmmm, Wednesday night opening. Isn't it State of Origin tonight? Luckily Sarah was planning to call full time on the wine and cheese before kick-off in the big game. I hopped off the 389 a little earlier than usual and walked down the hill to check out the group show that had been called "O" for no reason that was readily apparent to me at first. Maybe they meant the Christopher Hanrahan copper 'sculpture' which took up the centre floor, although I'm not sure it deserved the honour. Eventually I realised every work was a circular or had a circle in it and so assumed that was the answer.

Group shows are sometimes curious affairs and Sarah didn't disappoint with this random sampling of new work from her artists and a liberal raiding of the stockroom. I am always very suspicious of older work in these shows. This had stuff from 1990, 2001, 2003, 2008, 2009, 2010 and even included some actual new stuff from 2011 for good measure. Huseyin Sami has one of his cut paintings in there - a circle for $2.5k although I am not sure what they were asking for it back in 2009. Julie Fragar has a little clay sculpture (self portrait positioning the albatross) that caught my eye but it was a cheeky $3k. Koji Ryui's paper constructions ('La Stralia #1', above) were the standouts for me, and a steal at only $1k each. Here the artist has made an abstract kaleidoscopic image by layering the same photo or postcard of a typical Australian scene. Similar in execution to a Peter Coffin image I have from 2006 where he has created a rainbow spiral from found photos. Nice idea, maybe I will 'borrow' it one day. Jonathan Zawada's "draft" was pretty striking. Kind of like a cross between a Damien Hirst spin painting and a landscape, where the horizon of the landscape is stretched around the circumference and the sky becomes blurred in the middle. With a diameter of 120cm this circular work would take up a good portion of your wall, which it would want to for $9k. Christopher Hanrahan's embroidered linen piece "Towards a theory of everything (Insolence for JB)" was my other pick, but then again I like flags and this had the correct proportions. I doubt I'd be the only one who would need to read the artist statement to understand the relevance of the 'insolence' that he had embroidered on the blue polka dot fabric. I also didn't see why he didn't embroider the word a little bigger. He mustn't have a DA in for a flagpole like someone I know!
Points (all to works from 2011) - 3 for Koji's image above, 2 for Jonathan Zawada's draft and 1 for Hanrahan's flag - even if he could've finished the fraying edges. Also, one little request for Sarah - can you please make the numbers a little bigger? Those pins are far, far too small for cats that have left their glasses at the office.
Posted by Big Lamington at 2:37 AM