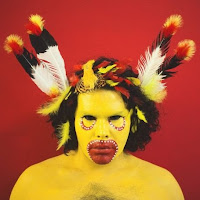 I was eager to chek out the Blake Prize and figured the National Art School venue would work for a family art outing. Jury is still out on that one, my little art critics listing the elevator and the stairwell in the former jailblock as tour highlights. It was an interesting show, designed to "challenge artists to explore the religious and spiritual in art. It is open to all faiths, artistic styles and media" according to the directions on the box. Let's see who had the divine inspiration ...

Short answer was not many. That is more an observation that I couldn't necessarily determine the religious or the spiritual in many of the entries, despite the fact that by themselves there were some great pictures in here. Some recognisable artists had entered in their trademark styles, Nell, Danie Mellor, Christian Thompson and Adam Cullen were all represented by quality entries. The judges gave the nod to someone I'd never heard of - Khaled Sabsabi with a video work documenting a sufi muslim ceremony from out in Western Sydney. Interesting piece, probably ticked a few political boxes as well. This prize, now in its 60th year, has managed to throw up a really diverse show - and if anything grabs you some of the works are available for sale. Just ask at the front desk, you never know you luck in Darlinghurst.

Points. I would've struggled on the judging panel. I am a little biased towards the artists that I would like in my collection, like Mellor, but I think I would give the chocolates to something that was more overt in its inspiration. So 3 points to Simon McGrath's "The Body and the Blood" (left). I'll give 2 points to the work I found most visually arresting, Christian Thompson's "Howl for your Troubles" (pictured above and yours for just shy of $6k). 1 point must go to Danie Mellor, his triptych is great (and huge) - full of native and masonic imagery. You really can't get the scale on screen so I'd recommend you check it out in person - this is showing until 15 October, and in honour of the Eurozone crisis entry is free!
Posted by Big Lamington at 5:13 AM