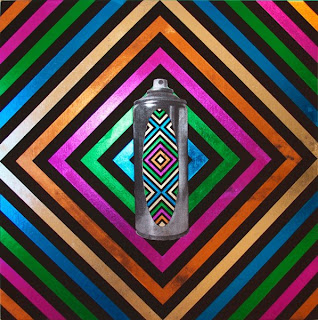 Last days of the Reko Rennie show at MOP. Reko is a graffiti artist who many will recognise as a contributor on ABC's Art Nation programme. I was keen to check this show (called 'Black Magic') out as (1) graffiti art is really taking off, (2) this is currently 'exhibiting' on ocula (yes, online gallery - will people really buy without seeing in person?) and (3) Reko comes across as a really good bloke on the telly!

Melbourne gallery Dianne Tanzer represents Reko and has put a price of $15k on the five works on show here. 4 are on canvas (hand pressed textile foil, screen print on belgian linen) and 1 is neon lights with a perspex frosted front. Interestingly I came across a fabrication studio (here) that has the production of the foil prints as one of their recent news items (the photos on that link show the those works in production and is an interesting read). I am also guessing Reko isn't doing his own neon which means he has joined that exclusive club of artists who just come up with the concept and get others to fabricate the work for them (I am all for it as my ideas run far ahead of my artistic ability). All these works run with his trademark geometric patterns which reference his aboriginal heritage (or in MOP speak, "juxtapose a contemporary representation of traditional iconography and an exploration of identity"). The foil works all have a spray can in the centre which he calls his message stick, nice turn of phrase. I would happily put any of these on my walls. I'd assume size (150cm x 150cm) and importantly price ($15k) limits the market for these as again not many red dots with two days to go. I reckon a 67cm x 67cm for $3k (which is same $/square cm as the ones on show) would fly out the door ... 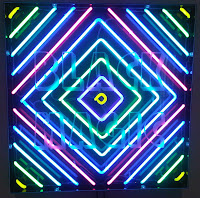 Points - 3 to Black Magic, pictured left courtesy of my blackberry and a gallery attendant who spoke to a mate on the phone for my entire visit. Seriously a guy with two toddlers? Aren't you worried about the art? I was. It was everyone's favourite - kids don't touch the glass! There wasn't much of a difference in the others, I'd probably go for the most colourful - Message Stick (Gold), pictured above. I'll also give a point to Todd Robinson and Mark Titmarsh. Their show "Public Fitting" over in gallery 1 is worth the trip alone. They have basically poured paint over some clothes which are hanging in the gallery, the video of their performance in pouring runs on continuous loops. My little art critics enjoyed watching the video and then finding the matching garment on the rack. Everything here was under $1k, the paint splattered shoes ($250) nearly came home with me but weren't in my size!

Posted by Big Lamington at 3:57 AM