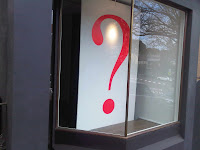 So the mystery posed by the question mark at 44 Gurner Street has finally been solved and 'Mick the Gallery' has been unveiled. I had read it was opening today and given I was back in Sydney for the weekend decided to enjoy the near 30 degree weather (a huge change from NZ) and stroll over and check it out.

They are kicking off with a group show which is always a great idea to give the punters a sense of what they can expect in the coming months. Pretty diverse group with a couple of names I've heard of (Archibald winner in 2003 Geoff Dyer, he had the really good portrait of David Walsh in the 2011 edition; taxidermist Julia deVille who I must've seen on art nation at some stage; and the somewhat ubiquitous Adam Cullen - although I think his work is a private treaty sale). Of the artists I'd never seen photographer Jessica Tremp looks interesting as does painter Amelia Disspain. Hopefully they go well in the old SSFA spot (which they are keen to point out has been an art gallery since the 1970's - don't mention the competition!)

Points: 3 to gallerist Megan Dick for pushing the go button on a new space within walking distance of Big Lamington HQ (I guess that is where the MiCK comes from, although my mate mIke frusc may have issues with their random capitalisations). 2 to Julia deVille for the ostrich skeleton with feathers and saddle - definitely catches the attention although not sure that would survive being ridden by my three junior art critics and 1 to Amelia Disspain.
Posted by Big Lamington at 8:49 AM