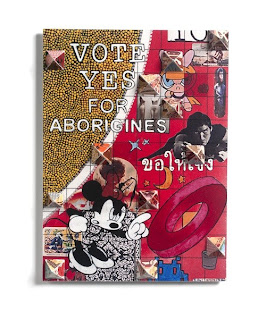 Tony Albert finally has a commercial show in Sydney, indeed this is his first commercial show anywhere for three years.  Called "FAMILY" (I am not sure of the significance of the capslock but I am willing to run with it), this show runs until 8 September so you have plenty of time to get along and check it out for yourselves.  I absolutely loved it and will be back to see it again, next time sans junior critics (two of whom came along to the opening which featured a great conversation with David Teplitzky who is a bit of an enigma to me at present despite some persistent interwebs stalking).

The show brings together much of his recent work.  Two of the big collages, installed on a background of his 'Be Deadly' posters, we had recently seen at 4A.  There was a large collection of his trademark velvet pieces, called 'Rearranging our history', which got a bit of a run in the SMH last weekend.  The velvets look great when installed en masse.  There is a lot to take in, and you can see his trademark phrases stencilled here and there.  I quite like text in art, and these quotes (some political, some cultural) do get you thinking.  Finally there was a collection of about 15 collages done on aluminium which were available to the general public although I think had all sold by the end of the opening drinks.  These were based on one of the big works which had been cut up and further worked with additional embellishments, especially from aboriginal playing cards which keep popping up in his work. I am a small time ebay tragic for random vintage ephemera (much like Tony although with less of an aboriginalia focus in my instance) so I guess the visual look and feel of the collages appeals to me.  What I really appreciate about his work is how he uses these kitschy iconic cultural references with what to me seems like a lot of sincerity. Mixed in with quotes I had seen before (like the always memorable 'pay attention motherfucker') were ones I hadn't come across like 'vote yes for aborigines' (which if you google it will turn up political badges from the 1967 referendum included in the Museum of Australian Democracy's collection - see you can learn something from visiting galleries!). 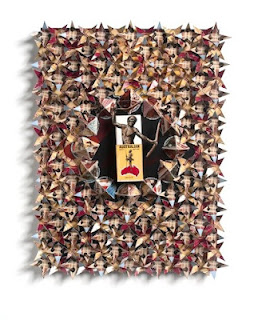 Points:  I'll restrict the points to those collages on aluminium (as these were the only works for sale at the show).  When I first saw them, I was primarily drawn to the text heavy works but with some more time to digest the whole show the 3D heavy ones are growing on me.  3 points for "We are family (get up everybody and sing)" pictured at top. Given the quote in this piece referenced the aboriginal referendum I particularly liked the inclusion of the Phantom in the collage as the mob behind that comic actually produced two special issues for the Australian Electoral Commission to explain voting to Aboriginal and Torres Strait islanders in the '80s (see Vote 1 Phantom and The Phantom enrols and votes; I think I have these in my comic collection somewhere). 2 points for "Are you ready for a brand new beat" (pictured just above), I am really appreciating the 3D elements of this and think I will have to add playing cards and matchboxes to my ebay shopping list.  1 point to "Callin' out around the world", again some more people popping out of matchbox action here.  That 3D effect of the person coming out of the work brought to my mind the work of US photographer Thomas Allen (his website here) who I remember seeing at Foley Gallery in NY back in 2007 (and if you are in NY he is showing again at Foley from 9 September to 14 October).  A highly commended ribbon would also go to the framed letter to Gordon Bennett the title of which I don't have handy! I'll keep an eye out for it on my return visit.
Posted by Big Lamington at 1:55 AM