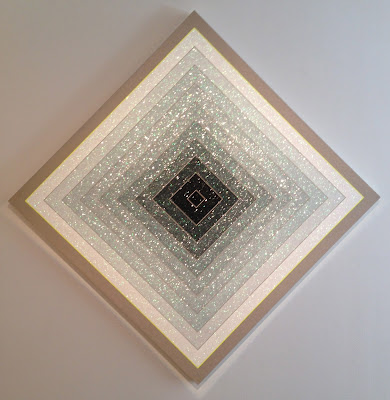 There are four galleries at firstdraft and three shows on at present which means someone is double parked.  Hopefully the combined impact of what is here can make up for it!  The current shows are on until August and include Jonny Niesche with a show called 'Too many heroes', Simonne Goran with 'The colour of shadows' and Lizzy Sampson with 'Dollars and sense'. 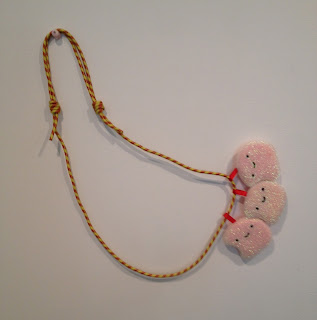 I was here primarily to see Jonny Niesche's latest work.  I've seen his stuff a few times now (at RoslynOxley last August and at Galerie pompom just the other month) and it is really growing on me.  Even the logicsticks (giant wooden poles covered in glitter, pictured below) seem like something I need to have in the house, although the one in this show at 3m long is starting to a bit large for most domestic settings.  Of the works on show I preferred the straight up glitter to the 'wall work' which I am still kind of trying to work out.  The glitter work included the tricky 'Split event horizon' which had a double sided glitter triangle sitting on a mirror to make a visual cube from the right angles.  It is like something he had at RoslynOxley and I must say it is a neat technique.  The glitter on the wall was a more traditional shape but hung in a diamond pattern ('A carrot is as close as a rabbit gets to a diamond', pictured top). More evidence as to my growing appreciation for Jonny's work is my reticence to take the piss out of his room sheet which uses far too many big art words for my comprehension.  The bits I did get I agreed with for the most part, this did seem like "a magical carnival of shape shifting possibilities", it was "teasing and stretching the spatial limitations of traditional painting" (I think he means the mirror here!!) and I do see the "visualizations of deep space ... glam rock and geometric minimalism".  Roll on August 3 for the artist talk. Bring a dictionary, or Andrew Frost. Moving further back into the main room you meet up with Simonne Goran's experimental sculptures.  In general I like her re-use (not sure it is upcycling) of everyday objects into sculptures.  She claims to extract materials from their more familiar uses to make more ambiguous shapes, "the challenge thus becomes to extract their [the new shapes] meaning".  Again, we are going to need to come back to get to the bottom of this!!  Finally Lizzy Sampson is in the back room with Dollars & Sense.  This was a pretty random collection of technique brought together with some (at times tenuous) connection to 'finance'.  I quite like the video concept, Lizzy is out with the metal detector looking for treasure in her back garden.  This references quite well to the sculptures in her show where she has some made up metal detectors with all kinds of odds and ends including coins, old batteries, sticks, tape and random handles.  On one of the walls there is a map of Australia made just by marking where a mine is located, it was pretty interesting and even better there was a souvenir version to take home.  Score! 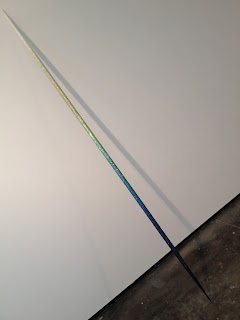 Points:  Really like what Jonny is doing with all this glitter on a large scale, he won't scoop all the points but he'll get the 3, for the diamond that is as close as a rabbit gets etc.  I will give Lizzy 2 points for her metal detector, helped also by the fact she had the giveaway map! 1 point will go to Simonne whose 'Pearls' (pictured middle) was probably my favourite work of hers and possibly also the least ambiguous.
Posted by Big Lamington at 5:43 AM