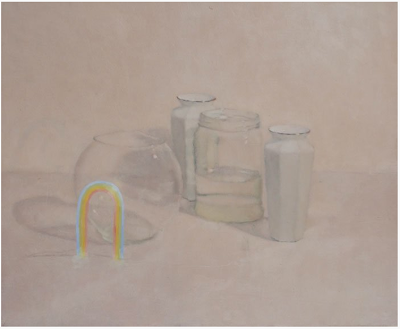 Despite 5 great years in the 'hood in the late '90s I never made it to the Brett Whitely studio in Surry Hills so it was time to make amends and also check out the scholarship that is dished out to an emerging artist ... 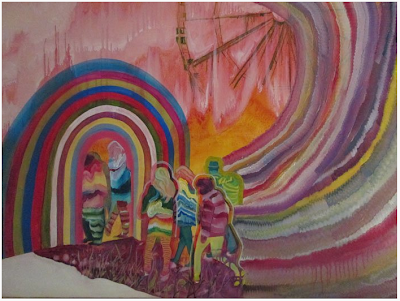 The studio itself is run by the AGNSW and is open Fri through Sunday.  The assistants take it pretty seriously and two of my junior critics copped an official warning for a bit of raucousness around the Whitely's on the ground floor (to be fair the noise does cannon around the studio, they need some carpet or something) so we were quickly upstairs to check out the actual studio and the scholarship finalists.  If you weren't paying attention you would easily miss it.  I did the first time.  They have a selection of works from three of the finalists tucked into a little corner and then on the i-mac on Brett's desk they have a slideshow running with some others.  They might be doing good work with the prize itself but the exhibition of it appears hung as an afterthought.  I get the sense that curatorially they see Brett as the big deal round here.  The winner was a young gun from the nations capital called Tim Phillips who had about 4 similar works on show.  It was a pretty tight little selection.  These were quite delicate still lives on a monochromatic pinkish background.  Kind of takes me back to art school with its focus on bottle and glasses and the like but it obviously appealed to the judges.  He is now $25k richer and has a 3 month stay in Paris.  I had originally thought two other finalists were chosen at random but now I realise both James Drinkwater and Dane Lovett were highly commended (I think they need some ribbons a la the Easter Show to make this a little clearer!).  Drinkwater's entries were very abstract and I guess meant to be landscapes based on the titles.  His colour palette is quite earthy and hung in this studio they appeared to have a real retro look as if they were painted in the '70s.  Lovett's work was reasonably familiar to me as I think I have seen his work at Sullivan and Strumpf.  These works were much sparer than his usual focus on obsolete technology.  Other finalists you only see in pixels despite schlepping over to the hills include Valentina Palonen, Clara Adolphs, Samuel Condon, Nick Hall and Tom Polo (Andrew Frost obviously not the judge!). If you can't make it to Surry Hills here is the show in all its online glory 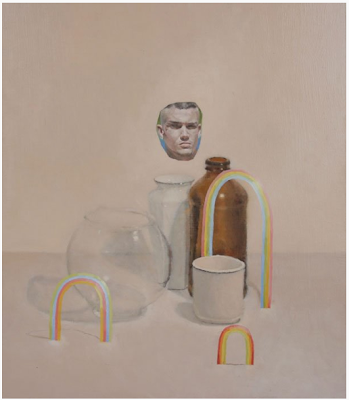 Points:  The fact that you see half of the show in person and the rest on the screen makes these points hard to give award.  And even my old favourite of blatant self-interest is absent as I'm not really overly familiar with any of these artists.  What would Richard Bell do?  I asked my daughter and rainbows it is.  I will give Tim the 3 for his portrait (above), 2 points for Valentina's tidal march (middle) and 1 point for Tim's Paninaro '95 (top).  Job done.  Let's go to Bourke St bakery (it's right around the corner - my son recommends the sausage rolls!).
Posted by Big Lamington at 12:25 AM