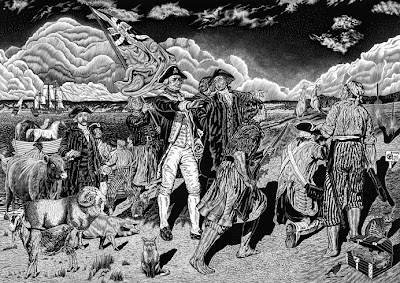 First time to Watters Gallery for the Big Lamington team.  I dragged one of the junior critics and we were off to see Rew Hanks' new show of linocuts, 'Cooks Conquest'.  I love how regularly contemporary artists turn to the image of Cook to make all sorts of interesting works (just the other day we saw Paul Ryan's take on the captain at olsen irwin). 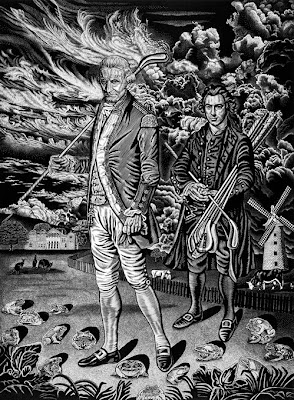 Hanks is a well established printmaker with a well developed technique.  These works are intricate and the details are sharp.  He is known for using the absurd to provide a critique of colonisation and environmentalism.  The absurd is quite apparent in works like "Banks, which ones mine" where the Captain and the botanist are playing golf with cane toads.  I really liked his version of the iconic 'the landing of captain cook at botany bay, 1770' which he has titled 'stop! there's no need to shoot the natives' (image top).  The catalogue essay also mentions the 2006 Daniel Boyd 'we call them pirates out here' as a reference which would be front of mind for any MCA fans out there (it is one of my favourite works from their collection).  Apart from the plethora of Cook images, I also liked the masonic style 'Cook's curio', Hanks has quite a few other works of Australiana including stamps and this great Anzac work fush and chupps (below) showing the blending of a kangaroo and a kiwi on bondi.  A really good show and as with a lot of prints quite affordable.  Print runs are about 30 so you've got some time on your side to make a purchase.  Show is on until 7 September. 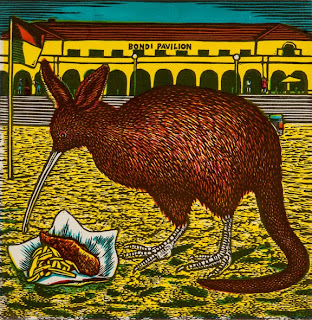 Points:  3 for 'stop!, there's no need to shoot the natives'.  I love an iconic image and this is pretty iconic.  I wouldn't mind someone doing a pirate patch over cook's eye for me though!  2 for 'Surfing the bombora', my daughters top pick.  I will give one to the cheeky flightless kiwiroo on bondi.  But then again as a member of the world's finest soft sand running club that is based on the hallowed sands of bondi I am little biased ...
Posted by Big Lamington at 6:41 PM