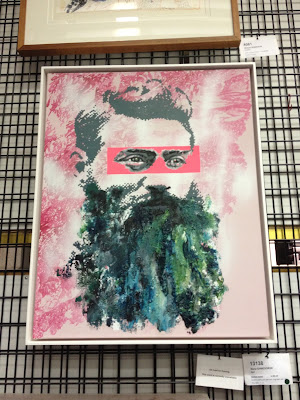 Behind the scenes tour of Artspace?  Count me in.  Artspace is occasionally referred to as 'the other national collection'  Founded in 1980 by the Liberal Fraser government it exists to collect Australian artists but also rents these out to galleries, corporates and punters like you and me.  The top rental is capped at about $5,500 for 12 months.  That is pretty steep but you can get some big names for your money there.  At the lower end smaller works start at about $165 for 12 months.  For the rest of the range they have a sliding scale based on the value of the work, I'd guess the rate is between 15-20% given a few of the pieces I recognised.  Their collection of over 10,000 works is valued at $36 million (which is only $3.6k per work).  They spend $1m a year on new acquisitions and claim to make a profit!

There are a couple of 'rack' rooms at Artspace (see top, Nana Ohnesorge's work on a rack).  The main one of the office and then a back one that also has the framing department and loading dock.  We started with a great tour and a couple of artist chats.  I like how Artspace has some collecting rules (so do I).  They only buy living Australian artists and don't buy at auction.  Two good rules there.  They also usually wait until an artist has had a second show to ensure they are not one off's.  One of the assistants let slip they have a target list and the young collectors in the room were desperate to get the names on that list.  Does anyone hear sheep? Artist Lionel Bawden had the best tip, go to some emerging art spaces and buy cheap art that you like.  You might pick the next Ben Quilty!  During the tour the Artspace staff were making out like the back room was a special treat so I took my all access pass literally and after the talks were over was the first one into the loading dock and framing area to have a good snoop around.  I was immediately drawn to the pile of art with a semi official notice attached to the front.  It read "photographs have been light damaged and are to be destroyed"!  Well they did say you had to have your own insurance.  I hope they were covered.  I tweeted that image last week so get on board the tweeter bus if you want to see it.  Also out back was a few works either coming in or going out.  Marcel Cousin's "1" (pictured below) caught my eye here.  I thought I had seen this image before but the name wasn't familiar.  Finishing in the back room I made my way back to the racks.  Probably one of the more unique aspects of this viewing system is getting to see the backs of works, which is useful for the massed Michael Lindeman pieces and the intricate Sophia Egarchos installation (photo middle).  I have got a view of the front of Sophia's work and then at the back you can make out the directions for the hang.  It's great browsing in Australia's biggest stockroom.  If money was no object and I actually had the space at home I could've seen myself taking a year rental of a Nana Ohnesorge Ned Kelly, a Will Coles Anzac and a Jonny Niesche glitter painting.  Given quite a few of those artiss are on my collecting want list I am not sure I'd use up my limited collection budget on one of them (these pieces were about $1k to rent for 12 months).  All in all it was great to recognise lots of familiar styles and also get exposed to some new artists.  I'd recommend the trip to anyone (although I think it could even be better once Artbank actually get their website up and running and the collection digitised). 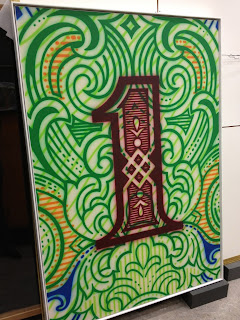 Points:  Lots of art and I barely scratched the surface, it is tough to hand out the points.  I will give the 3 to Lionel Bawden who not only had a great staedtler sculpture on display also had a really interesting talk and some great advice for young collectors.  2 points will be held in reserve for the work I am considering renting - it is one of the cheaper rentals and I don't want anyone gazumping me until I've made my mind up!  1 point for Jonny Niesche's glitter work (Sugar 'n spikes) that scooped the points at Roslyn Oxley back in August 2012.  It's so good that it is out of the racks and on the office stairwell!
Posted by Big Lamington at 9:08 PM

Email ThisBlogThis!Share to TwitterShare to FacebookShare to Pinterest
Labels: Artbank