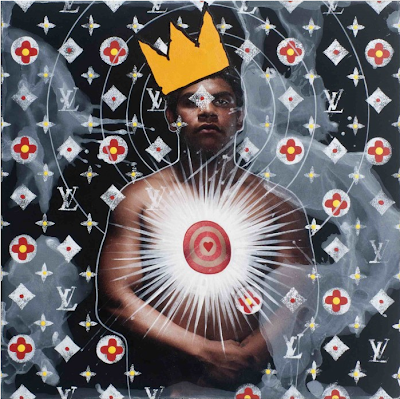 I''ve been to quite a few really good shows lately but have had limited time to reminisce on them all so the next few posts might be a little short and sweet.  I'd been really looking forward to seeing Tony's new show.  I'd heard from the man himself back at Richard Bell's artspace opening that this was kind of a new direction and I wasn't disappointed.  "Brothers" as the show is called is a collection of images of young aboriginal men (including TA) with targets painted on their chests.  The photographs are then reworked with painted interventions on the print itself.  This creates for the most part a series of unique works (although there is also an edition of a couple of the photos without the paint on top).  Like past shows there are single works available and the big monster wall install which to me was excellent value for money (considering you get 21 separate pieces, which at the rate the singles were going for would be 3x the price of the group work).  Of the individual works I probably liked 'One love, one heart' the best (image top).  This was a really positive work that to me had elements of basquiat and Kehinde Wiley going on, and a little bit of bling.  I can't get past a good text work and the political message of 'its just a shot away' (image below) explicitly proclaims the higher purpose that Tony aims for in most of his work.  At the decorative end of the spectrum I really liked the works where Tony had used a lot of geometric patterns for the intervention and then continued that geometry in pencil on to the wall ('just like the time before and the time before that' - titles are good too).  Really great show that is on until 7 September so get down to Zetland and cop a squiz. 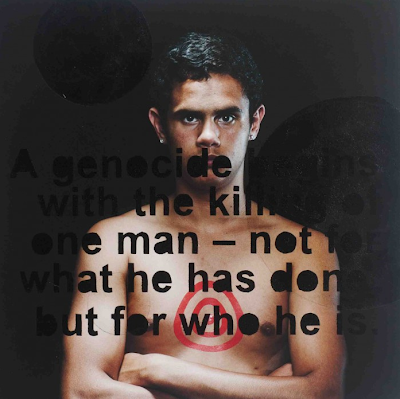 Points: I think it is unfair to compare the single works against the wall install that is brothers but hey, the unfairness of life is one of the themes of this body of work.  3 points to Brothers, see more images of it here.  Special prize if you can find the image of Tony in here (hint, he is the alien!)  2 points to one love, one heart and 1 point to just a shot away.
Posted by Big Lamington at 11:00 PM