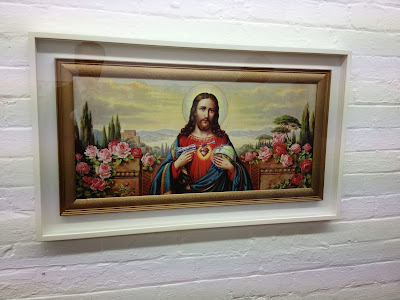 So this post might be dated 26 September (as that is when I saw it) but that is just the magic of the interwebs for you as I am nearly a month behind.  It feels like I overdosed at Sydney Contemporary and I am just now shaking it off.  Ordinarily I think I would cheat even more and skip this post but I really want to write something about this show because I enjoyed it so much and Phil is a great bloke as well as great artist. This show contains more of his signature style of working over the top of found work.  There were a collection of about 10 larger works and nearly a hundred smaller ones (where he had re-worked vintage sports / cigarette collector cards).  I'll start with the smaller works as these are easier to remember (they are all called 'untitled').  For the most part Phil has turned older stars into superheroes.  Don Bradman became Batman and Chuck Fleetwood-Smith (who, I hear you ask, just an eccentric genius who played test cricket for the good guys) became Superman.  There were quite a few cartoon characters I didn't recognise and my heart skipped a beat when I recognised the Phantom (image below), of whom I am still quite fond.  There was obviously another fan of the ghost who walks on opening night as there was a red spot on this one pretty quickly.  Apart from the superheroes I do love spotting a Captain Cook in contemporary art and Phil has obliged with an interesting version that had a bit of an ultraviolence / clockwork orange feel for me (image above).  The bigger works didn't disappoint and these were also flying off the shelves.  My personal favourites involved re-working of the generic catholic art where industrial lithographs of Jesus all of a sudden had cowboy hats and pistols or even lasers (see top).  I am not sure who directed the framing of these works but I love the aesthetic that has been created of the original framed work (dust and paint chips included) framed under glass in a white box.  Nice juxtaposition of the new and the old and complements Phil's style very well.  This was a really strong show and no surprise that it was selling well on opening night.  Phil takes very familiar and iconic imagery (including even the kitschy with the religious art) and subverts it, sometimes very obviously but occasionally in a quite subtle way.  Maybe I should get Phil to appraise my Warnie and Waugh! 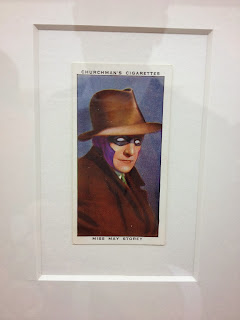 Points: As I have misplaced my room sheet I am going to have to give the points to the works I can remember.  3 to the Jesus with the laser (this is the image top).  I quite liked the minimal re-working of this piece, he gets the most out of the source image.  2 to the Cowboy Jesus and I will give 1 to the Captain!
Posted by Big Lamington at 9:28 PM