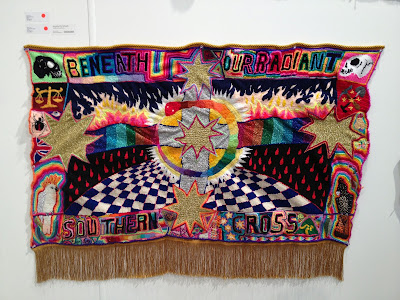 It is a little late but here is the follow-up to my initial thoughts on Sydney Contemporary.  I had three visits in all to Sydney Contemporary: opening night with the Mrs, Saturday with the 3 year old critic and Sunday with the 5 year old critic.  I got something out of each visit and it was very interesting to take the kids along and see how they found the whole carnival.  My 5 year old loved the carabiner clip to collect all the postcards and I think there is a show & tell coming up for her mates at primary school about this.  I would've liked to go to some of the art world show & tells (aka artist talks) so maybe I will better arrange my calendar next time.

I hear a lot of stands did quite a bit of business, Sebastien Goldspink from Alaska has got a great story about the restocking process of his stand! I had been saving my shekels all year for this but for some reason (potentially related to a little extension of Big Lamington HQ that the Mrs is running) didn't manage anything.  That said, just like any show all the good stuff sells first.  I did really like the colourful and out there Paul Yore tapestries (top) and these were quite affordable.  Artbank had savvily picked up the Southern Cross, and they had these nifty little stickers which bignote themselves and lend quite a bit of credibility to the artist as well (note for next year, dodgy up some 'acquired by MONA' stickers and the Big Lamington stand will sell out!).  I think another reason I had sat on my hands is that I wasn't really after something I could pick up on a random weekend in Sydney (so this ruled out the familiar galleries) and I was probably too spoilt for choice by the visiting galleries.  Neon Parc got added to my watch list and Jan Murphy / Sophie Gannon had a really strong double booth.  New Zealand's Gow Langsford was impressive and I enjoyed whoever had Greg Semu (was it Alcaston? seems a little different for them).   I thought Gallerysmith could've chosen a little better as I've always thought her roster was strong (both Lucas Grogan and Eric Bridgeman are no longer repped in Sydney so these were the two I would've shown).   All in all a great event and one I am looking forward to revisiting in 2015! 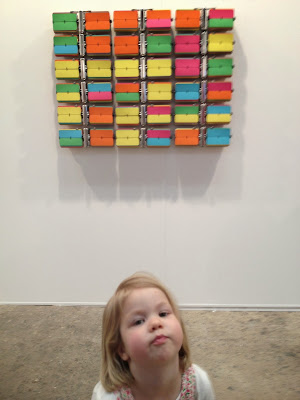 Points:  All the points today are for artists I've not seen before*.  Paul Yore takes the 3 on the unanimous decision of father and three year old (photo top)  2 points to Greg Semu for the fantastic maori last supper (middle).  1 point to Rebecca Baumann for the automated colour field (above, with an exhausted 3 year old).
* at least not in Australia before, on further thought I think I saw Greg Semu in Wellington but what goes on tour stays on tour.

Posted by Big Lamington at 6:00 PM