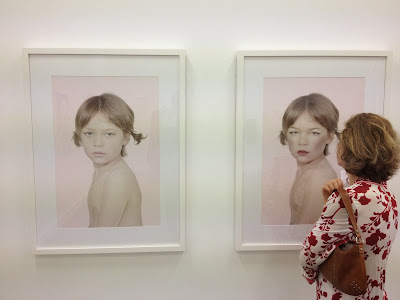 So I've been coming to the grad exhibition here for a few years now (here's 2010, 2011 and 2012).  None has been as hyped as this 2013 edition, I think that is in part due to the new sponsorship from the advertising agency Saatchi & Saatchi. The tagline for this years show was "how will you react?" and was accompanied by a full court press of twitter, graffiti bombing sidewalks, posters and even this crazy message truck.  Each artwork even had its own #hashtag.  This had better not #suck ... 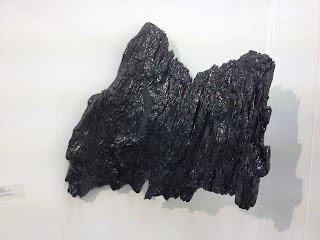 I'll start by saying that the photography was really strong this year, both Abbey Swinn and Sarah Dugan striking me as names to watch out for.  Abbey Swinn's photo series contrasted natural photos of young girls with the same sitter but with lots of make-up (image top 'Silvy').  The contrast speaks to the growing sexualisation of youth and made its point very well.  Sarah's photos were also striking images of the remote outback with the occasional character present.  On to the painting section which was a bit mixed.  Truth be told, I was indifferent* to quite a few of the works, but then again I'd expect that I am not going to like everyone in such a large grouping of art students (painting is the biggest major by far).  Eloise Cato made a mark with her black epoxy covered lumps of charcoal (pictured top, apologies but can't decipher in my notes what it is called, I think the title starts with a W and a C!).  She had shrewdly put out business cards so you could email her for a commission (her website is eloisecato.com).  It was a busy walk through the studios but I stopped for Alex Grilanc's works.  He had a great piece called "Muscle Beach Pattern" in the main gallery which recalled that well known AGNSW piece Australian Beach Pattern by Charles Meere.  Alex has populated his work with posing bikini babes taking selfies and muscled up guys juicing up with 'roids and protein shakes.  His other pieces in the studio were along a similar vein and he even had some great little zines to give away that promoted his website (yes, well done son - good to see more grads fully equipped with websites!).  Other painters I noted down included Anthony Essenza and Emma Cooper, who did these quite saturated paintings of girls with bright glitter ice-creams (pictured below, a little Lolita-esque and there were a few more a bit more suggestive than this one). She also had a few that were borderline nsfw except for the glitter pasties.  Of the ceramics majors another Eloise caught my eye.  This one was Eloise Rankine (and again with the business card and websites).  Eloise had quite a few nifty little houses and other vessels on display but she was also putting the other ceramacists to shame by showcasing her mixed media skills with some embroidery art as well.  Her "I am my mothers daughter" in the main gallery was pretty striking.  But then again I don't mind a bit of text here and there.  Finally the sculpture section highlighted Nina George's constructed bodies in recycled wood bits which brought to mind one of those Campana brothers favela chairs.  All in all a great opportunity to see so many different artists in the one place. 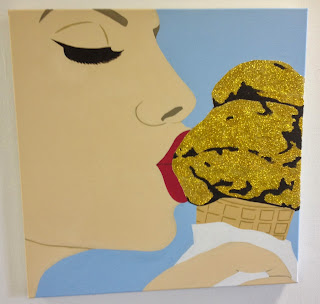 Points:  My 3 points will go to Abbey Swinn for her photography.  In my mind she was well ahead of the pack here and there might even be a Big Lamington commission of the junior critics coming her way.  I'll give 2 points to Eloise Cato for the very slick charcoals.  They look great in the studio.  For the final point I will let my better half pick the worthy recipient and in her mind the best talent on display was Jemma Burke whose paintings conjured up abstract landscapes and displayed solid technique (my Mrs was once the art student herself so is a hard taskmaster on technique, I will spare you some of her less favourable observations!).  Also well done to all the grads out there hustling with postcards, business cards and websites already.

* as an aside, this was my concern with the whole 'how are you going to react?' campaign.  It runs the risk of over-hyping a show that will never deliver a reaction to every work.  I am reminded of a classic Andres Serrano (of piss christ fame) quote "I like to make pieces that make people feel something.  Any reaction is better than indifference".  I think punters will be indifferent to quite a lot of the work they see at any art school. I expect the same from the upcoming cofa annual, as the artists are still developing and experimenting, etc.
Posted by Big Lamington at 4:00 AM