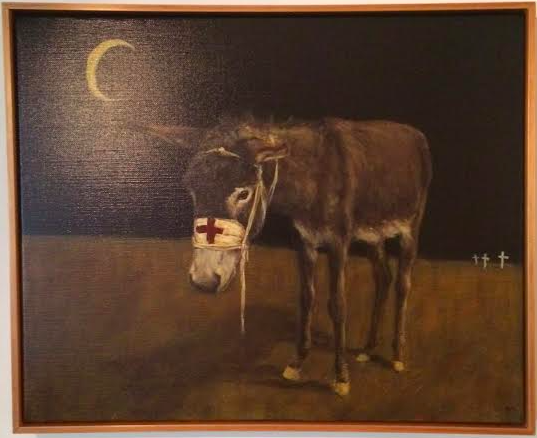 One of my favourite art little art prizes, the Gallipoli Art Prize is in its tenth (and by design) last year. Out of all the random little art prizes I am much sadder about this ending than say, the Blake Prize.  Walking around you knew exactly where you were, all the entries were right on brief.  Let's take the elevator to the second floor of the Gallipoli Memorial Club and check out the finalists ...

So it was good to see this art prize get a bit of press.  By now you may have read that Sally Robinson won the $20,000 for her Boy Soldiers.  All in all this was a worthy winner.  This year I really noticed how popular animal entries have been over the years.  A dog in a gas mask won the prize (and my 3 points) in 2013. A pigeon bearing medals took my 3 points last year.  And again there are animals everywhere this year.  I think the donkey's had it with 4 representatives but there were at least 2 horses and even pigeons again!  Of the donkey's I did quite like Martin Tighe's 'The Burden' (top).  This work also took out one of the judges highly commended's.  Alison Mackay's 'Fallen' (bottom) was actually two works.  The spoons were in order on the left and all mixed up on the right.  I think there was some deeper meaning hidden here but more importantly if you look closely she has managed to include both a donkey and a pigeon!!  Leaving the animals entirely out of it there was quite a lot of portraiture, of old diggers, of young diggers, of generations of soldiers and more.  To be honest, that does get a little generic en masse.  Of the figurative works I probably likes Susan Sutton's best, her 'Out Came the Sherrin' (pictured middle) showing some soldiers enjoying some down time.  And very appropriate although I am not sure I left my slouch hat on whilst playing footy at cadet camp! 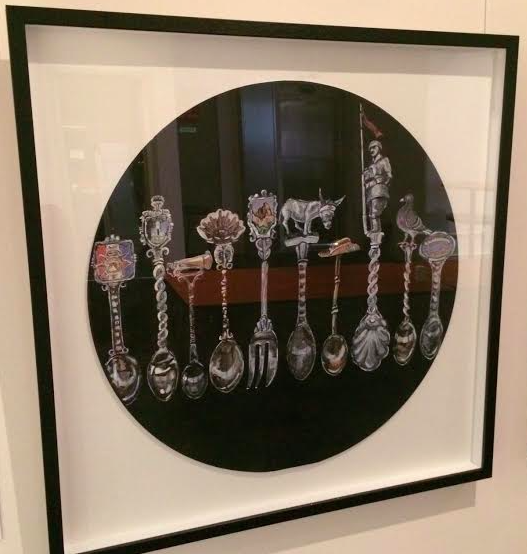 Points:  3 points will go to Martin Tighe's donkey, s/he looks like s/he needs it!  I will give 2 points to the spoons which appeals to the badge collector in me and I will give 1 point to Susan Sutton.  I might have scored that one higher if it wasn't AFL.  Seriously this is Sydney.  Our diggers played league!
Posted by Big Lamington at 12:01 AM