Lindeman and Jinks at SSFA - 20 October 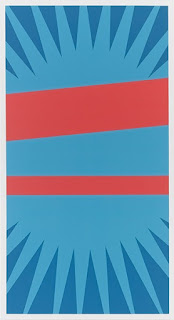 So with my better half away for the day and me with three junior critics in tow what were the chances of making the Michael Lindeman opening? After checking the cupboard for bribes and finding a bag of mixed lollies they were better than good!  Armed with a pocketful of jellybeans and plenty of patience we set off for Zetland to see some new work.

We raced upstairs first.  We have a Michael Lindeman next to our dining table and we love that piece.  The kids couldn't believe this was the same artist.  Michael has switched the text heavy ads for fields of colour.  He sticks with advertising but this time strips away the words to leave the pretty colours and shapes.  Sadly I think I recognised some of the source material (isn't that the Myers catalogue?).  This was quite subtle work in comparison to his previous stuff which really grabs you in bold faced text.  Surprisingly I think I liked the most subtle works, where the source was less obvious, the best.  Works like 'Best batch yet' (pictured top) and 'something's added to the air' were really great, though I wasn't really looking with an acquisitive air given I've blown my 2012 budget (more on that later).  The junior critics liked 'the call of things' which had a few balloons on it and to them it looked like a party invitation without the writing (and without the cake).

Downstairs was Sam Jinks who makes these very lifelike sculptures, he even uses human hair.  Now I find them a little creepy to be honest, mainly because they are so realistic.  The junior critics were transfixed, although I did have to say 'no touching' about a dozen times.  There were only a couple of pieces in the show, a pair of half boy / half fox creatures (officially called 'unsettled dogs', unofficially called 'the fantastic mr. fox without his clothes on'), an embryonic creature and a pair of newborns ('untitled', pictured below, which I can see may also be a gag, some of our junior critics were untitled for a few days until we could actually agree upon a first name, so this is one of the rare times I will not rant about the inability to name a work).  Of them all we liked the newborns the best.  As my daughter said they were just like baby dollies.  That's right sweetheart, really really expensive baby dollies. 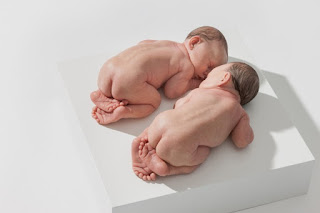 Points:  With the jellybeans distributed for safely getting through a visit without breaking / buying anything we can move to the points.  The 'babies' was the talk of the car ride, so it will get the 3 points.  2 points will go to Michael's "best batch yet", and 1 point to his "something's added to the air", which kind of looked like an iphone case.  Now there's an idea ...
Posted by Big Lamington at 5:00 PM