THE MAKING OF THE FLAG - 7 October 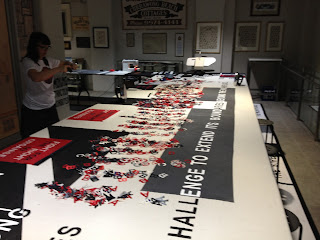 So after absolutely loving the last 'halls for hire' event from Performance Space I think I was one of the first to check in to the Sydney Trades Hall for their latest bit of performance art, The MAKING OF THE FLAG (yes they do it in all caps, who is little old me to buck the system).

Anyway, I had no idea what I was in for when I sauntered in on Tuesday lunchtime.  I actually thought they would be doing australian flags, or something like that, but Sussi Porsborg was all about union banners.  And the punters had to make them.  Well I love a bit of audience participation so I was right in there.  Now those who know me would suspect this might have been my first trip to trades hall, and you would be right.  You might also think I am not really a collectivist at heart, and again you would be right.  But the big thing I look for in art is "sincerity".  Seriously, to me it is all about whether the artist is sincere.  And Sussi was really into it so that made it all okay.  But I needed to come up with a slogan for my banner so thinking quickly to an article I read in the Economist a few years ago that said the US workplace had not actually become any safer, they had just outsourced the dangerous jobs to China I dutifully composed a banner (see above picture).  Sussi even had me on the janome sewing a few hems, and I wasn't too bad.  I was really looking forward to the weekend to see what else had been made.  To be honest, I was a little shocked.  It looked like following my visit they had a busload full of retired welsh coal miners through here on a organised tour.  Lots of references to Thatcher of all people which I didn't get.  And quite a few political ones about Tories being pricks, and richer, and smarter, and better looking.  Okay, maybe not the last three.  Anyway, I was a little disappointed that something that promised so much delivered so much old stuff rather than look to the future.  Even more disappointing is that this young lib actually knows a little bit of the history of organised labour and appreciates the fact that Sydney was the first place in the world to organise the 8 hour day.  Thank you Sydney stonemasons in 1855.  The 8 hour banners festooned around the place and all the old union banners from the federated pastry cooks, and the pressers union (seriously, guys with irons, pressing) looked regal in comparison. 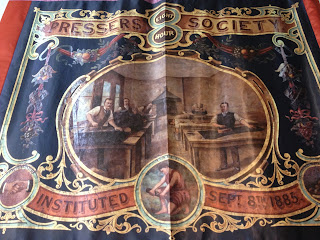 Points:  I will give 3 to Sussi for organising this.  Probably not the same turnout as the CWA event but still an interesting location and subject matter.  2 points to the Pressers Union (above) a great 8 hour banner.  1 point to me for turning up, twice.

Posted by Big Lamington at 4:47 AM