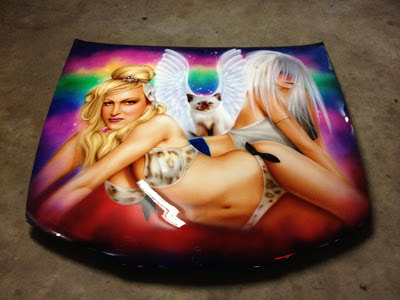 A little MCA young ambassador outing to see the latest group show at Alaska Projects, called Passing Parade.  The crew at Alaska are all MCA alums so they welcomed this motley bunch of art lovers with open arms. Now Alaska is a crazy art space, it is in the middle of nowhere in Kings Cross.  More precisely it on the 2nd underground floor in a council car park.  The proprietors of this artist run space approached council and scored a tiny former mechanics office for their gallery.  And it really works.  Enough with the car park, let's check out the art ...

This show was curated by Joel Mu.  I was dead keen to see Reko Rennie.  Yes he of the now famous Taylor Square art installation (which Sydney Council have apparently extended for three years).  Now I think Reko is fantastic and his work has really grown on me, to the extent I am kicking myself for not picking up one of his vibrant diamond works when he showed at MOP a year or so ago.  This time he has again stencilled a wall with the trademark diamond pattern of his people.  But, seeing as how this is basically what he did at Taylor Square on a bigger scale he has also added a vintage Australian flag which he has outlined in whitewash an aboriginal flag over.  The work is called 'Original' (pictured below) and is political in a subtle way, on first glance I didn't even recognise the aboriginal flag outline.  In front of this was an amazing airbrush job on a standalone car bonnet.  Called "Kingswood high with the windows down" (pictured top) this was the work of The Motel Sisters.  Now initially I didn't know anything about the Motel Sisters.  I had come mainly to see Reko, but it turns out that the Motel Sisters is the group act of one of my other favourite artists - Liam Benson (the other half is Naomi Oliver).  They really play up their Western Sydney background and explore a bit of bogan culture.  The airbrush bonnet was so over the top kitsch it was amazing.  It even had a cat with unicorn wings.  And even better, it was a portrait of the Motel Sisters.  You know, I can kind of see a bit Liam in drag on the left, and I am kind of scared to say that he looks hot.  Other artists represented included Sarah Contos with a random scuplture of found and crafted objects called 'Cornucopia'.  It was really great to hear the curator speak about all the works but even after hearing Joel's spiel I am not sure I got what Sarah was about with this.  There were also a couple of video works which are hard to really appreciate in a crowded group setting.  I thought Zehra Ahmed's were pretty good and I was glad to see they were made on an iPhone - I have no excuse!  George Tillianakis' work was tough to approach without the backstory, which did explain it all quite neatly.  As a former New Yorker I can appreciate that no one really batted an eyelid when he did one of his performances in NYC.

Points:  3 to the Motel Sisters - that was awesome.  I want to buy a 2nd hand commodore and put that bonnet on it and just do laps.  2 to Reko Rennie. Not sure I should praise him too much as he is right at the top of my "like to buy" list!  1 to Zehra Ahmed and her iPhone.  Also a highly commended to Sebastian for bringing this crazy space to life.  Loved it.  And another highly commended ribbon to Joel Mu who gave a really passionate back story to the show he put together.  I'll be back.
Posted by Big Lamington at 3:00 AM