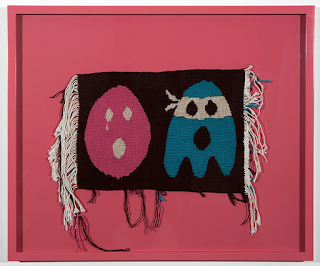 It was a big week for Nell fans.  Openings at Alaska on Tuesday (Let there be Robe) and Roslyn Oxley on Thursday (Gravest Hits 2013).  Would the Big Lamington be able to make both?  You betcha. 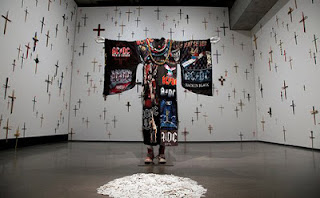 First up was Alaska.  As I understand it this is the same show that Nell had down in MONA, and I am thankful Alaska has brought it up here.  The room (image above, I think this was actually MONA, there were too many punters in my iphone snaps of the Alaska opening!) was decorated with crucifixes of paintbrushes and drumsticks (there were also a couple of interlopers I recognised from the Christmas project Nell did a few years back that the junior critics collected - from memory we had a heart, star and a leaf although I wish the kids had picked a ghost!), however the big focus was the AC/DC t-shirts reincarnated as a Buddhist robe.  In front of this was a pile of guitar picks will Nell spelt out in the AC/DC font (points, but not that original, we did the same thing on black t-shirts for my rugby club back in the day - for those about to ruck!).  I actually liked how this was described in the program - "Jesus said 'Let there be light', AC/DC said 'let there be rock', Nell says 'LET THERE BE ROBE!'".  I've said it before but Nell is of my vintage and we're from the same hometown and I agree that it is impossible to grow up in the '80s / '90s in regional NSW and not be into Acca Dacca.  I thought the Bon Scott tribute wall at Alaska was a particularly nice touch.  Here Nell has painted a wall white and put a cross with "Bon Scott 1946 - 1980" on the wall in the AC/DC font.  Punters are encouraged to graffiti it up and it will be interesting to go back and have a look at it now.

But before I do that we headed over to Roslyn Oxley for Gravest Hits.  There's more AC/DC here.  Pride of place are a series of 3 large works each containing 49 (7 x 7) Back in Black album sleeves.  That makes the work a massive 220 x 220 cm and for that size it was a pretty good deal.  This obviously continues the Bon Scott tribute link (the all black cover being a memorial to Bon Scott whose death by misadventure precluded his participation in this album).  Officially called 'More Sound Hours than can ever be repaid' (pictured below) these works are quite impressive, but I think that is as a result of the scale.  You need to be pretty close to see the differences in the condition of each individual cover.  On the other side of the gallery is a companion piece of 3 similar works featuring the Beatle's white album (which also answers my question as to why Nell didn't use Dirty Deeds done dirt cheap - great album but shite cover art, and would've clashed badly with the White Albums!).  Elsewhere there were other new works which repeated themes and images that Nell has used before (hence I guess the gravest hits reference).  My favourite of these other works was definitely 'girls and boys of the same name' (pictured top).  Is this meant to reference pac-man? Because I was really wishing I had a table top console version when I got home. 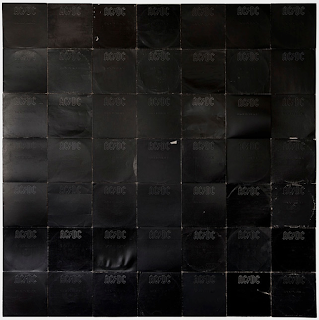 Points:  3 to the ghosts of 'girls and boys of the same name'.  This references the great tapestry Nell has at Deutsche Bank (let me put my love into you).  2 points to the Alaska install.  1 point to the Sound Hours for Back in Black.  I did love it but thought I could maybe re-do this as a 3 x 3 courtesy of the 'bay?
Posted by Big Lamington at 3:19 AM