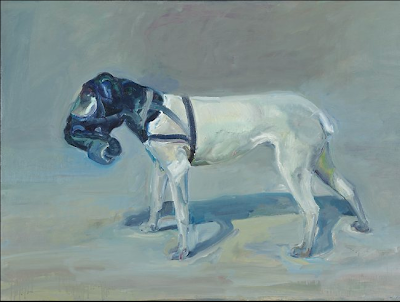 Anzac Day is on 25 April which means it is time for one of my favourite Art Prizes, the $20,000 acquisitive Gallipoli Art Prize.  This is run by the Gallipoli Memorial Club and it couldn't be any more low-key if they tried. I was there at lunchtime on the opening day (Wednesday) and was the first punter in to see it.  That said, at least they had a girl behind the bar this year as last year it was even quieter.  Please get in to see this before 5 May, if not for the art then just for the random building and club that one day sooner or later will be extensively renovated. 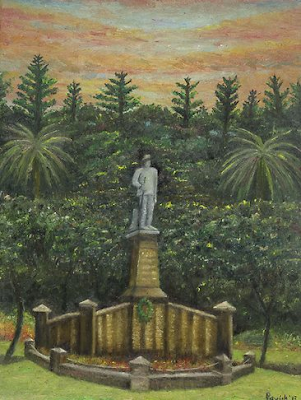 I think I actually agreed with the judges this year.  Peter Wegner's 'Dog with Gas Mask' (top) won the prize and could be my favourite.  It definitely dominated the main room.  Most of these works have overt military themes although there are a few artists who try to sneak a regular work of theirs into the show.  Leo Robba's 'Remembrance' was a great big painting of an immaculately kept hedge and whilst I could appreciate the painting I thought it was a little too subtle for the brief.  There was quite a bit of trench art, and Bill Nix has a good example of this.  I really liked one of the smaller works, David Pavich's Waverly Memorial (above). This was also a complete bargain at $800 and if it was Paddington instead of Waverley might've come home with me.  Peter Gardiner (a previous BL 3 point winner) had a great entry 'Light Horse' which reminded me of his Dobell entry a few years ago.  Stephen Nothling, who collected BL's 3 points in the Gallipoli Prize in 2011, is back with another nice entry this year, a mixed media piece called 'There is sunshine' (below) that rocked some nice medals and ribbons.  And I am a sucker for ribbons.  Also good to see current Archibald and Wynne prize finalist James Powditch bag the triple by being a finalist here as well.  His work here is a little random, but nice and visual.  And big, gee everything is getting supersized these days.  He had the portrait of Ben Quilty in the Archibald.  Speaking of Ben Quilty, I wish he had entered one of his Afghanistan war artist works here.  Would be a good look.

Points:  I am going to double down on Peter's Dog with Gas Mask, 3 points.  This was great work, and really stands out in the field.  2 points to David Pavich's Memorial and 1 point to Stephen Nothling.  Highly Commended to the Gallipoli Memorial Club for putting this on.  I had a great great uncle land at Gallipoli on 25 April 1915 and he, like many others, never came back.  Lest we forget.
Posted by Big Lamington at 9:08 PM