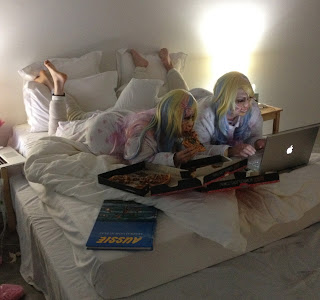 So if you hadn't had your fill of performance art with 13 rooms the MCA was here to help.  They had scheduled a week of performance art and called it a workout.  I looked at the schedule and made it my business to check out the Motel Sisters and loving that so much came back to see what Agatha Gothe-Snape had in store for the punters.

First up was the Motel Sisters on Tuesday.  This is an art collective comprising two hot babes (Liam Benson and Naomi Oliver) who have sadly let themselves go and in a yoko ono / john lennon inspired sleep in are being slacktivists for the day (see photo top).  That is eating pizza and liking good causes on social media.  I liked the concept as did many punters who were lining up to get a photo with them in bed. 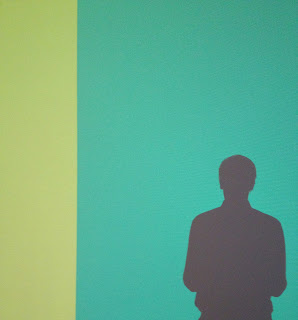 My next visit was on the Friday for Agatha Gothe-Snape.  Sadly for me when I visited nothing was actually happening.  I was informed that her performance work was a play and it was currently 'Act III - Intermission' also known as 'The Space Rests (2013)'.  Okay.  Was the MCA getting a little ahead of itself here?  Perhaps questioning whether performance art, without the actual performers, could still be called performance art?  My answer is no.  The performers in question were out on an extended lunch break, about an hour and a half by my calculation given the next act wasn't due to commence until 2.30pm.  The sad thing is the MCA website says this is on from 10am - 5pm so punters like me on their own lunch breaks come in to the gallery with the not unreasonable expectation to see performance art (and its not like this is the first time this has happened, Anastasia Klose did the same thing at Primavera).  Maybe next time we could be a little more precise on the webpage and let the art lovers know exactly when the art is on?  I did like their screenshows that were holding the fort (above, with some random punter blocking the view, but I liked that about the projection) however even these stopped during the space resting until someone came in asking "is everything on still?".  No.

Points - the Motel Sisters have to scoop the pool here as they were the only ones making busy with the performance art on my visits.
Posted by Big Lamington at 3:17 AM