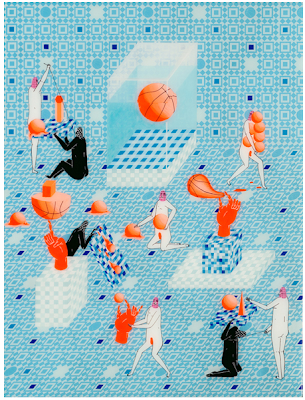 I do like going to Chalk Horse.  I love that a loading dock can be an effective gallery space.  Their latest show, Maze Walkers by Mark Whalen just opened and is on until 20 July.  And if you are only in the market for a browse then get along as all bar one thing has been sold.  Solid effort that. 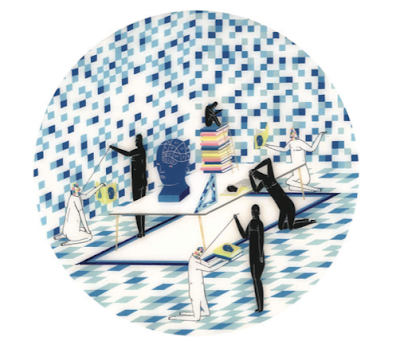 I'd never heard of Mark but checking online shows he is also better known as street artist Kill Pixie.  I still can't say if I have heard of him but back in the day used to get into that whole lowbrow juxtapoz magazine scene (this was when I was in grad school in the US).  I also recognise his LA gallery, Merry Karnowsky, from the same influences.  Despite being from Sydney it looks like he has shown mainly in Melbourne and BrisVegas.  Indeed Chalk Horse is putting on this show with a mob called BlackArtProjects.  I didn't really pick up any street references in these works.  They are all detailed illustrations and paintings on board and then coated with resin.  Kind of like Sam Leach in scale and finish but with more detailed futuristic scenes and much much more geometry.  I was lucky to actually be at Chalk Horse as Mark explained his work to another punter and it was fascinating to eaves drop on the technical aspects of it - turns out to be works on paper that are then mounted and resin coated.  I am a sucker for the shiny finish and liked a lot of what I saw.  I didn't really understand the whole meaning of the amorphous futuristic characters but I found the little worlds that were constructed in each work fascinating.  I also loved how he references his own work from the show in different pieces.  That is getting quite common and I realise its one of the things I like about Tony Albert's work as well.  My favourites were probably The Baller Room (60 x 45cm top), Self Portrait - Isolated Swimming through my subconscious, and some of the circular works like Plant Collectors and Into the Mind (32cm diameter, above).  These were all reasonably priced, starting at $2k for the smaller circle works up to $11k for a larger 4 panel work.  Mark also has some ceramics in this show and it is an interesting little collection of pieces although for me the paintings were the stars.  If you can't get there in person you can also browse the catalogue at home here.

Points:  3 to the Baller Room, 2 to Into the Mind and 1 to the Self Portrait.   Also Highly Commended for the broad web presence of this artist - here's Mark's site.
Posted by Big Lamington at 11:30 PM