Ben Quilty / After Afghanistan at the National Art School - 13 April 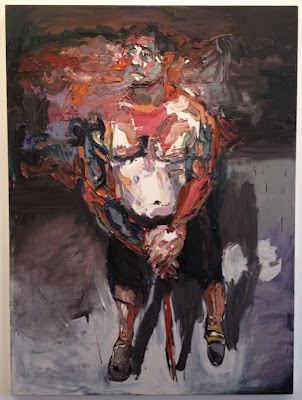 Well this exhibition has certainly cemented Ben Quilty's place at the top of the art heap.  Ben is back from spending time as the official Australian war artist in Afghanistan and the War Memorial is touring this around the country starting in Darlinghurst.  What you would usually think of as a solid exhibit in a kind of an out of the way gallery was the hottest ticket in town.  I swung by here on opening night and it was more than standing room only.  It was a line up to play sardines.  I had a quick squiz that opening night and then (appropriately) did a General Macarthur and declared I would return. 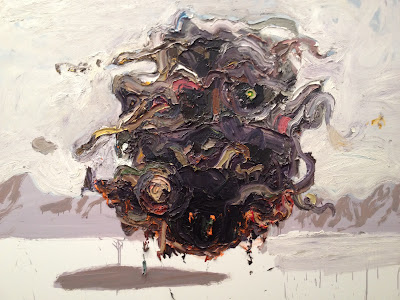 So here we are on the last day of the show and there are still masses of people here.  This show must've set some kind of attendance record for NAS.  I had the whole crew here for the hit of culture.  The junior critics aren't yet appreciative of signature styles, dismissing Quilty's heaving canvasses thick with oil paint primarily for the crime of "using too much paint" or worse, "he is wasting some paint here".  The big kids (i.e. the Mrs and I) really enjoyed the portraits of servicemen, displaying the emotions you'd suspect to be post traumatic stress.  I thought it was especially important to see them en masse.  As a room they seem more than the sum of the parts.  I think this is the only time you will see them all together as reading the labels it appeared a few are the property of the war memorial pursuant to the war artist gig and some others were done at a later stage and so remain Ben's.  Quite a few of the portraits are of the Special Forces so Ben doesn't give the full name.  Just Private S or Sergeant K.  My top pick was one of these quasi anonymous works, I think it is Sergeant K (pictured top).  I also really enjoyed the mess of paint that was Kandahar (above).  I understand this was painted when he first got back so it is just a tangle of emotions and colours without being anything in particular.  It kind of looks like a future weapon from a Transformer movie. 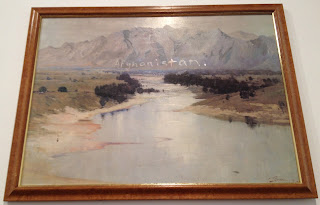 Points:  3 to Sergeant K.  2 to Kandahar and 1 to the daubed Afghanistan landscape (above).  Here Ben has taken a found painting of the Blue Mountains and superimposed Afganistan.  This one to me suggests the British trekking off back in the 1800s.  I would like one of those!  Also great work to the War Memorial for continuing this great tradition.  I will have to look into this war artist thing a bit more.
Posted by Big Lamington at 11:09 PM