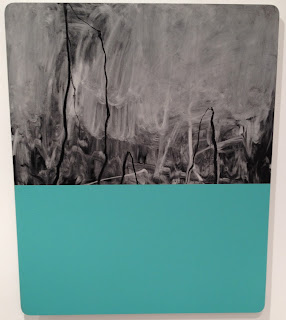 I love the education in emerging artists that MOP provides.  I also love their Sunday opening hours so I snuck in here for a quick squiz sans junior critics who after a busy morning were happy to watch dvds at home (although I was instructed to take photos of any rainbow artworks if they had them).  I thought I had read some press that described this show as a survey of drawing but the catalogue essay sets me straight - "this exhibition must not be mistaken for a survey of broader drawing" rather drawing "acts as loose connective tissue between [the artists in the show] and their work". 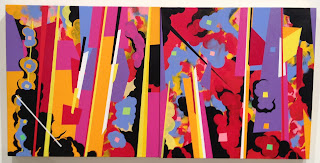 Sadly for my daughter there were no rainbows.  And I probably wasn't going to take a photo of Leah Emery's cross stitched porno scenes for her.  I am not sure that tapestry counts as drawing in the literal sense but I know the Dobell used to allow it so I am down with the 'drawing with thread' / 'mark making' angle.  I am familiar with Leah's work from Sullivan & Strumpf and again she has some small scale scenes on show.  I would love to see these get a bit bigger (I actually think the repro in the MOP catalogue is bigger than the real work) although I appreciate that cross-stitch takes some time.  Maybe some studio assistants are required?  More traditional drawing came from Jonathan McBurnie who had about 8 large scenes of quite intricate craziness.  Lots of body builders, super heroes and the odd topless women.  All good there.  He is also the man behind the essay in the catalogue.  I am not sure I really agree with his take on drawing as a resistance to the digital status quo (and from what I could gather he was saying was that if it isn't realistic looking then it can be a drawing, even if it is actually a painting).  Christian Flynn had a few colourful acrylics on canvas.  As paintings they were great, I liked the colourful Unification Theory II the best (above).  As drawings?  My advice would be to not enter them in the Easter Show, they take things a bit more literally.  Also interesting was Miles Hall's take on colour swatches, Splice (top) was my favourite of these paint on aluminium works.  It also leant itself to the cover of MOP's quite detailed catalogue for the show.  If you want to learn more about abstraction and see the words "mimetic realism" used in a sentence then grab this and flip to page 14/15 for more!  This show runs until 5 May. 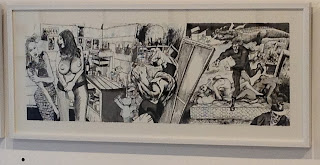 Points:  I will give 3 points to Jonathan's Grief Beard (above).  Not just because it was a drawing but it also had cameo appearances of the Phantom, Rupert the Bear and no less than 3 topless women.  Someone agrees with me as it has sold.  2 points will go to Christian Flynn for Unification Theory and 1 point will go to Miles for his Splice.

Posted by Big Lamington at 2:47 AM