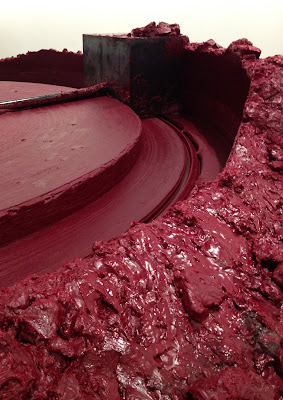 So I had a free ticket to the Anish Kapoor show at the MCA and I'd left it to the last minute to use it.  Was this some implicit criticism from my subconscious?  Let's see what all the fuss was about ...

First thing you see dominating the front lawn is his Sky Mirror and inside on the ground floor is this massive kinetic wax sculpture My Red Homeland.  Is bigger better?  I read a great article about the death of the gallery show by Jerry Saltz the other day (that article here) and there was a great quote in it from dealer Gavin Brown.  Take it away Gav:  "When we are able to fly around the globe in 24 hours, and that is a common occurrence … these large-scale works might be an unconscious attempt to rediscover awe." Okay, so I buy that, these works can be awe inspiring.  I was probably more awed by the big red wax thing than the Sky Mirror and then I realised it was because I had seen the shiny one before.  Kapoor's Sky Mirror was in front of the Rockefeller Centre in 2006 when I was living in New York.  And I recall being mightily impressed by it back then.  So there are only really 2 reasons why I wasn't feeling the awe this time around, either the MCA is not as impressive a backdrop as the Rock Centre ... maybe, or (more likely) the novelty had worn off and it was just a big mirror.  Up on the third floor were some of the smaller works.  My top pick was the circular mirror that had about a thousand different shards making it up (above).  I didn't write down its name as I had picked up the free catalogue but the MCA had cunningly not included half the works in this so I feel like I should make up a name.  I am inspired by a twitter post that referred to the Kapoor show as "Decade of Selfies" in reference to all the punters taking photos of themselves in the works.  I like it, and it is probably better than the official title.  Anish, your welcome.  There was another behemoth up here too, called Memory, which looked like a rusty submarine (or given it is owned by the Germans a u-boat!).  On one side you see the external scale and from the other end of the gallery you only see the inside.  When I read the blurb I realised this was a neat little trick - "the artist challenges us to imagine the entire object by piecing together our memory of the artwork from different locations".  There were some more mirrors up here, more of the fun house variety than the awe inspiring variety and the piles of pigment sculptures he does that I don't really get.  There were some neat 'trick' works like sandstone with apparent holes in it and a work that appears flat that goes into the wall.

Points:  I will give 3 to the Decade of Selfies mirror.  2 points to my red homeland (what were they doing with the wax? shipping it back?  could've made some coin in the gift shop with some sweet candles!).  1 point will go to Oracle.  Overall I am glad that the MCA does get some international big names out but so far the leader in the Big Lamington clubhouse is Christian Marclay - bring back the clock!
Posted by Big Lamington at 11:30 PM