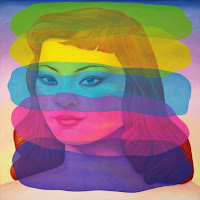 Unlike my better half my own postgraduate studies were a little more prosaic than art history, so I am always chuffed when I can pick an influence at 50 yards. The newest show at Harrison Galleries caught my eye on the trek up to five ways. So we were off to have a look see at "Lookers", showing work from Annette Bezor.

"Tretchikoff?" says I to the gallerina. I didn't really need to hear the confirmation (we have a vintage Tretchikoff print stashed in the attic waiting to decorate my tiki bar) as "her appropriated and reworked figures" mostly lean to the appropriated. Although I guess cropping and blowing up to sizes of 140cm x 140cm or even 165cm x 165cm counts as reworking. My favourites were when Annette has put in a unique touch, like when she "overlays them with translucent bands of colour to mask their characters and turn their portraits into abstract paintings", like in Face Value 3 (above), 4, or 6 (all $15k) or Mocha Sunset ($27k, from 2009). I also really liked Singapore Slang ($22k) which skews and distorts probably one of the most iconic of Vladimir's exotic Chinese ladies. The image that Shadowlands borrows from appeals but then I always question why a work from 2008 still hasn't sold (its available for $22k). Sometimes the reason can be good ("its just too challenging for conventional tastes" is a favourite dealer line), but this piece was one of the blander entries so I am guessing everyone feels the same. Will be interesting to check back if they can move it. 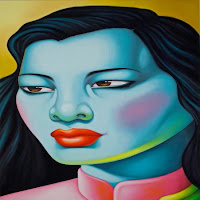 Points - 3 for Face Value 3, 2 for Mocha Sunset and 1 to Singapore Slang (pictured left). Now I really liked a lot of the work in this show but my collecting rule of thumb is to try and avoid buying artists that are older than me (this leaves quite a field of emerging artists, that gets bigger every year). If you didn't know Annette had been round a few years the gallery does provide helpful clues, such as the reasonably high prices listed above and a CV that, while truncated, does include an award from the 70's. But if someone wants to buy me a present then I wouldn't say no. These would look great in a tiki bar ...

Posted by Big Lamington at 4:08 AM No comments: 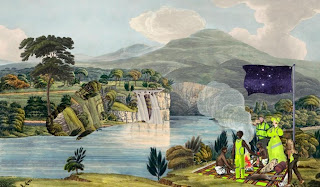 My little art critics are big fans of video work and when we heard Joan Ross had a new work debuting at GBK the whole team was keen to go. Would Joan Ross' latest video get the thumbs up? Let's see ...

I like Barry's gallery as everything is on show. You can have a good sniff around the stock room and there are a couple of exhibition spaces. In the front room he has a group show from past students of Cofa (the uni of NSW's art school - college of fine arts) that he has sponsored a prize for (appropriately titled, "where are they now"). We didn't spend too long in this room. Just long enough for the team to pick out their favourites. The back room contained the object of our quest, a video called "BBQ this Sunday, BYO". Great title, so far - so good. Now on with the show. This work is very similar to the video she had in the curious colony show (and we had seen last year). That edition of 5 was a sell out so it was good to see more punters available to get on the Ross train with an edition size of 20 this time around. However, this was $4,750 ... hmmm. I mean I really like her videos, this one again sources imagery from colonial artist Joseph Lycett and animates and updates with some of her own trademarks (like the fluoro yellow safety vests from her previous show). As an amateur vexillologist I also really like the flag she has in it - a southern cross but with actual stars photoshopped in there. This edition was expected to sell out so it was good to see only 9 dots when I was there and a couple of halfs which were meant to be institutions who had to go through committee. Well my committee thought the price a bit steep for an edition of 20 so we asked a gallerina at a competing shop about their thoughts regarding video. Her recommended checklist was to make sure you get the work on both dvd and usb stick to avoid technical obsoletion in the future (Joan passed this one) and to avoid editions greater than 5. Joan obviously doesn't subscribe to that limitation and I'm not sure I do either. But then edition size is one of those interesting topics that I think is well abused. Generally in this day and age there is no limit to reproduction (certainly true with digital works like videos) so the constraint on supply is an artificial one designed to push up the price. This is my top reason for not buying prints and only buying unique works - at least it is the only one. At nearly 5k a throw are there 20 punters out there who would want a Joan video? I am on the fence. I would be all over an affordable one like the proverbial (and wouldn't personally care if it was an even bigger edition). Apparently the main bit of value in the video edition is the certificate of authenticity. Really? How 'bout I take an undocumented usb stick for 5 hungy?

Points: 3 to Joan for the great video, as of posting we had passed on it given the internal conflict in my head regarding appropriate pricing for digital editions, but never say never. Of the Cofa stuff my 3 year old liked another video work - 2 points to Hugh Marchant and my 2 year old really liked the 'sculpture' of Lachlan Anthony - 1 point for the office chairs with precariously high seats.

Posted by Big Lamington at 4:42 AM No comments:

Curated by at the Embajada Mexicanos - 11 August 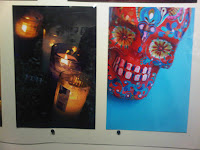 Quick lunchtime outing in the coolest little capital in the world (I should be getting sponsored by tourism NZ!) saw me cruising down Lambton quay on the lookout for the Embajada Mexicanos (that is the Mexican Embassy for the non Spanish speakers out there). I'd seen the listing in the local rag for this show and given my fondness for the coolest big capital in the world (Mexico City) thought I would see what City Gallery curator Reuben Friend gets up to in his spare time ...

Once you manage to find the embassy and get buzzed in you are escorted to this little room and left to your own devices. This show has two Mexican photographers and two kiwi ones. I liked the ones that were more representative of each country. Eduardo Oses' images were more obviously Mexican. All dia de los muertos / day of the dead and stuff like that. Given the complete absence of other people in the room I was able to snap a cheeky souvenir (pictured above). Aimee Ratana's images also focused on indigenous themes but with more of a fine art bent (she has a masters in maori visual arts whereas Eduardo is more a photojournalist). Again I thought the strongest images referenced more obvious maori imagery - like people with face tattoos.

Points - 3 to the Mexican Embassy for going to all the effort. 2 points for Eduardo Oses, must have been the skull. 1 point for Aimee Ratana.
Posted by Big Lamington at 12:48 AM No comments: 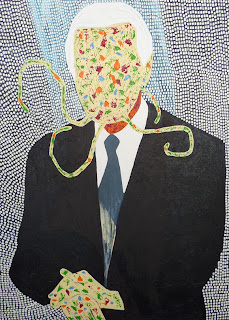 Wellington again? The team here at Big Lamington couldn't make it up to Auckland for their art fair but another fairly cold week in Wellington had its bright side when we ventured out one sunny lunchtime to check out what the self appointed "coolest little capital in the world" has to offer the art lover.

First up was Bowen Gallery on Ghuznee street. This was recommended to me by a gallerina in Sydney so I was eager to check out its wares. I was actually happy that they had a stock room show ("Stuff Up") on as it enabled me to check out a few of the gallery artists. And it was an interesting collection. I liked the photos of Ans Westra - striking image but I'm not sure I'd be slapping down 7000 kiwi for an edition, even if she is meant to be a living kiwi treasure. Top pick for me was probably Bekah Carran whose hanging sculptures were very cool and 4,800 kiwi. Just next door and up some stairs is Hamish McKay gallery. The title of the show was promising, International Velvet. I love velvet paintings, and am still kicking myself for not picking up a Tony Albert velvet a few years back. But Julian Dashpar's aren't your grandfathers velvets. His are all very abstract, and from the 80s so wear was beginning to show (and who says contemporary art practice neglects the conservation angle!). Judging by the 2 page scholarly essay accompanying the show Julian is kind of a big deal around the kiwi art scene. Based on this evidence I will just have to believe them. Third stop was Suite Gallery, and a quirkier little space you will be hard pressed to find. Just round the corner on Cuba street you walk into an old building that seriously looks as thought the squatters are still in residency of and go up 2 rickety flights of stairs until you come to a bright little white room. Their current show is Arie Hellendoorn's Inward / Outward and I really liked this. Arie's style is to do rather simple portraits and substitute the head for something a little different - all colourful shapes. There are also a few head drawings that suggest some old medical illustrations. They have even got a couple of these works over at the pop up space on Oriental Parade that I admired on my morning jog (I run slow enough to take in the art, but that is more from level of fitness rather than a dedication to aesthetic appreciation). Something for everyone here price wise, watercolours for 2,900 and oils or acylics for double that (5,800 kiwi) - lots of red dots so the punters agreed with that strategy. On the way out I popped my head into Enjoy which is a public art space on the first floor which has appropriated the red and white livery of a well known cola brand for their logo - and it is a good look, reminds me of some t-shirts we did for my rugby club back in the day. Here they had a solo work by Tiffany Singh which was a big mandala thingy on the floor made with rice and then originally a number of wind chimes that had been signed out by viewers on the promise to deliver to another museum an hour away. Nice touch.

Points - 3 to Suite, interesting space and best show of the day. 2 to Bowen gallery, looks promising and 1 to Hamish and Enjoy. It was great that there is no more than 50 metres separating 4 good galleries. It was nearly like being at an art fair ... nearly.
Posted by Big Lamington at 1:17 PM No comments: