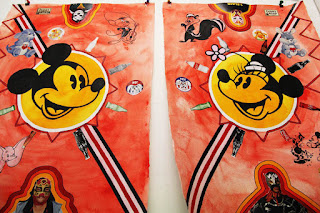 This has probably been the biggest art highlight of my last month, despite only getting around to posting it now.  I have been a big fan of Tony Albert's work from afar but this was a great chance to actually meet up with the artist and get to have a good sticky beak into how he puts his work together.

I can't remember exactly how I found out about this, I think through facebook or even twitter courtesy of some propaganda from his Sydney gallery, SSFA.  See, getting an iPhone can improve your life!  It was a pretty miserable time weather wise back then for Sydney so it was on a wet Saturday afternoon that I ventured out with one of my junior critics in tow to the artspace bunker in Woolloomooloo.  Tony was just finishing a six month stay at the space up on level 4 or something like that.  I didn't realise they had multiple studio spaces, it was quite the rabbit warren up there.

First impressions.  The walls were chock a block full of different pieces and some of it was just in piles.   There was a lot to digest.  Tony uses a lot of recognisable iconography so I was hoping that my 3 year old would appreciate the disney references whilst I could look through the room at leisure.  Wrong, he had scoped the place pretty quickly and was ready to leave in about 5 minutes.  Time for iPhone improves your life part 2.  With my three year old happily sitting in a corner playing a variety of games I was able to continue the tour and even have a quick chat to Tony.

Second impressions.  Whilst there were a few decently sized collages he was working on (see images above) I was pleasantly surprised to see such a huge volume of smaller work.  There were hundreds of A4 sized works.  Apparently he is putting together 100s for a book project where you need 108 or some specific number that I can't exactly recall.  Regardless, I was gladdened to see so many great pieces that would (a) fit on a lot of my walls and (b) hopefully be reasonably accessible price wise.  It was also really interesting to see the pile of ephemera that he has collected to use in collages.  Lots of vintage aboriginalia, I think I need to hit ebay and help him out.  Continuing on my flag theme from a couple of posts ago I can confirm that Tony would be at the top of the list to commission a flag from.  The works are packed with iconography and the very strong colour palette of red, black and yellow from the aboriginal flag is used frequently.  The only issue is that I doubt he has the time due to all the museums that he is producing large works for.  Given his growing profile I was surprised how few people had turned up.  The guy on the front desk said about a dozen when I was leaving.  But then again, I am sure I miss plenty of events through sheer ignorance.

All the points today to Tony (best on ground).  I will keep an eye out for some of these studio works to be exhibited in the future, I think 4A in Haymarket has a couple of the bigger collages on show now (which is on my itinerary to visit).  We also picked up a great little poster as a souvenir and Tony even signed it for my junior collector.  Hopefully that will encourage him to 'be deadly'.
Posted by Big Lamington at 5:43 AM No comments:

Next up in the belated post category is the Redlands Art Prize, for two reasons. (A) It is still on, going until 2 August so you have stacks of time to see it.  And (B), it is a pretty decent show, well worthy of the visit to the National Art School who is thankfully playing host.  I don't think I would've made it northside if they had it at the school or the Mosman art gallery which used to host (actually, I know I wouldn't have, but that is another story).

Putting aside for a minute why a private high school needs an annual art award, although I think even my alma mater does it, the format of the Redlands prize is a tad confusing.  Twenty established artists choose twenty emerging artists and they all throw their hats in the ring.  30k in prize money is shared between the winners of each category.  Ben Quilty took home the main prize, but then again that might be a bit of shrewdness by the judges as the 20k in prize money is a pretty good trade for a large Quilty given the prize is acquisitive.  I learnt later that the 10k emerging prize went to Kelly Doley for a work I cannot recall viewing, but hey, whoever agrees with the judges?  Kelly had been invited in by Justene Williams so I wonder if she had to give her a cut of the 10k!

What did the Big Lamington team think?  Well, I always like Danie Mellor's stuff and this didn't disappoint though it is a little big for my lounge room, which is lucky as it was 36k.  Oh yes, didn't I mention, some of these are up for grabs.  Btw, another arbitrage lost by the judges, 20k to Danie for the prize and the school could've flipped it and paid for a scholarship.  And I thought they were a college of knowledge.  I saw an artscape documentary on Maria Fernando Cardoso's insect penises so knew what the images were first up but I wasn't a huge fan.  I loved Newell Harry's Vanuatu gift mats, I saw some similar islander weavings in kiwi land last year and I like how they look with the text incorporated into the weave.  If I had a spare 5k I'd pick one up, or actually head over to Port Vila and get one custom made by the crew who do these for Newell.  Good to see Joan Ross' video again, although I didn't like it as much as I did last year at GBK.  If I wasn't sure then that 5k is a bit rich for an edition of 20 then the Redlands pricing of 7k was never going to pull me in (not sure if that is appreciation since last year or an extra slice of commission that NAS/Redlands is weaving in).  Also good to pick Paul Ryan out of the crowd with a diptych similar to the piece I liked at the Sulman.  Top pick was always going to be Ryan Presley's Infinity Note (pictured above).  He got a nice SMH write up about this work and my money is where my mouth is on this one as I have one of his counterfeits and love it.  So far he has stuck to the new look currency but I would love to see some older look notes next time.

Points:  easy this week, 3 for Ryan (he also got my vote in the peoples choice, and if I go back for another look he will get it again!).  2 for Newell Harry and 1 for Danie.  And if you can't get to NAS then you can look at the cattledog here.  Highly commended for whoever put that together.
Posted by Big Lamington at 3:15 AM No comments:

Criena Court at Robin Gibson, some time in May 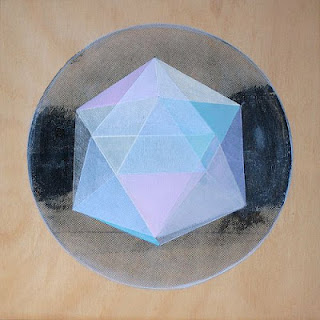 Gee time flies.  The team at Big Lamington has been a little pre-occupied with a not so simple development application with our not so friendly council, so hasn't had a ton of time to hit the keyboard in artistic blogging pursuits.  As a result we will have to play a little bit of catch up here.  Will try and stick to the good stuff ...

I've been following Criena's work since seeing her in the 2010 NAS postgrad show.  This is her second show at Robin Gibson which is worth a visit merely to check out a huge grand old terrace house.   This show had a little bit of everything, assemblages, works on paper, some mixed media and a few acrylics on plywood.  Budget friendly too from memory although I seem to have misplaced the room sheet and Robin doesn't give out his prices online (which is fair enough).  I do like her geometric patterns.  You see stuff like this elsewhere but Criena is definitely developing a recognisable style.  More importantly I think these designs could work on a flag and as the Big Lamington HQ may just about to be getting a flagpole (part of the DA referred to above) then I am going to need to commission me some flags to fly on special occasions. Criena, you are on the short list.

Points:  I'll pick something from each category, 3 for geo + landscape (above, I think that would work in flag grade polyester!); 2 for palm springs and 1 for figure + nature 3.
Posted by Big Lamington at 2:28 AM No comments: