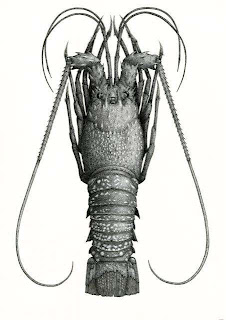 Points, I am going to give them all to Angus. I didn't mind Hashim's prints but the detail in the drawing is amazing and I am a big fan of the naturalist style (although I did tell him to be a bit more subversive and go all Walton Ford). 3 to the ribbon eel, it is really colourful and looks like the hardest thing to actually draw, 2 to the balmain bugs (it was nearly a tie with the lobster pictured above but I feel lobbies get all the publicity) and 1 point to the Brown Pelican etching which really recalled an Audobon or Gould print. Keep your eyes peeled here as we may be getting an Angus Fisher in the BL collection at some stage in the not to distant future ...
Posted by Big Lamington at 2:50 AM No comments:

Groups Who at Roslyn Oxley9 - 19 January 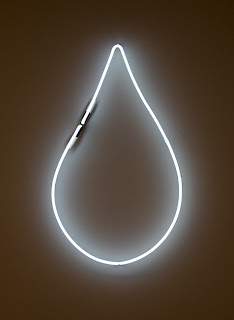 Summer group show season continues at Roslyn Oxley today with their 'Groups Who' exhibit running until 4 February. So who is in this group ...

We liked the TV Moore photos, these were very bright and detailed c-prints of abstract paintings. It took a little while to work out they were actually photos (unless you are the type that instantly refers to the room sheet at every stop!). I was impressed by the price tag on the Rosalie Gascoigne works, $200k would give me a couple of decades collecting at my current rate so I'll let someone else pick up those recycled corrugated iron panels. I liked both Nell's contributions. We had neon on the mind so was interested to see you could get a piece for about $2.5k (if you move quickly, editions 4 and 5 go to $3.5k - I will really never understand edition pricing). Her big wooden ghost panel (213 x 228cm) was also pretty striking. Glenn Sorensen's works didn't grab my attention but the prices in euros certainly did (his weren't the only works not in AUD at this show). Now I realise that might conjure up some glamour to a prospective purchaser but to anyone with a passing interest in finance it says "wait, these will get cheaper"!! Last highlight was Imant Tiller's two contributions which were pretty difficult to separate (indeed called the path of luck, I and II).

Points, 3 to Nell's neon drip (above), quite a cool piece. I think it is similar to a piece in an office in Sydney that I have been meaning to go see. 2 to TV Moore for his 'Colour, Drunks and Ritalin' and 1 point to Nell's big ghost piece. These are growing on me the more I see them but my kids are dead set scared of them (which is why we ended up with the happy christmas ornaments she made, but that is another story ...)
Posted by Big Lamington at 2:17 AM No comments: 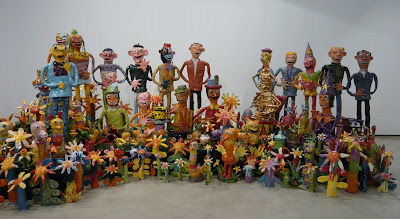 Martin Browne Contemporary (to give the gallery its full name) is a local and we browse the windows here regularly as I am down at Trumper Oval often, either taking the junior critics scooting or doing a run myself. I think it must have just opened for 2012 so fresh from a run around Trumper Oval and dripping with sweat I ventured in to check out their wares.

They've got the requisite summer group show going on at the moment. The obvious highlight is what is in the front window. Kiwi artist Jim Cooper's 'Family Portraits' (pictured above) which is a random collection of ceramics. The kids have looked at this in the window regularly, our favourites have included the big ice cream cone and some of the animals. I was amazed to see even more in the back room. Picking up the room sheet today I was pleasantly surprised that the prices ranged from a recession friendly $20 for a small piece all the way to $2k for some of the figures. I couldn't be bothered to count up all the different pieces but I reckon there are hundreds of things here. They look great as a group but I am not sure that could be replicated in ones or twos. Other highlights from the group show for me included a big McLean Edwards portrait with a rabbit (well out of our price range) and a nice swirl by Ildiko Kovacs. It was interesting to see the work of a diverse group that the gallery represents, the gallerina on duty's top pick was a Neil Frazer landscape that was very detailed but wasn't a subject that grabbed me.
Points: 3 for big Jim Cooper, 2 for McLean and 1 to Kovacs.
Posted by Big Lamington at 4:33 AM No comments: 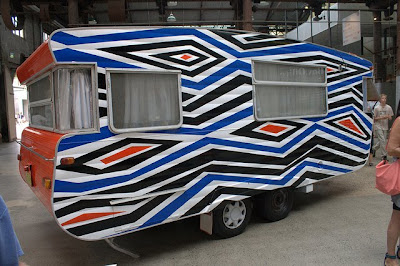 Happy new year for 2012. January is a bit of a quiet time for galleries and we are only just getting into the swing. First up for us is our first visit out to Carriageworks to see Brook Andrew's Travelling Colony.

Brook is a fairly high profile contemporary aboriginal artist (as in I've seen his stuff in big things like the biennale and I can recognise it!) and this work is part of the 'Black Capital' programme of the Sydney Festival that focuses on Redfern being the aboriginal capital of Australia (and former residence of yours truly back in the day). For this show Brook has handpainted about half a dozen land yachts (aka caravans) in graphic aboriginal patterns and installed a tv in each with local residents giving their stories of Redfern. I liked them. We even overheard someone ask what they were doing with the caravans at the end of the show as he wanted to tow one around. Not a bad idea, although I reckon Woollahra Council might complain if we parked one outside Big Lamington HQ for a stretch.
It's hard to give the points this week as I can't really distinguish between each caravan, they all comprise the show. I did prefer the red, black and gold one which echoes the colours of the aboriginal flag. I might take the kids back to run around Carriageworks and get a better photo as the ones available on the web aren't that good. So lets just give Brook the best on ground for today.
Posted by Big Lamington at 4:03 AM No comments: