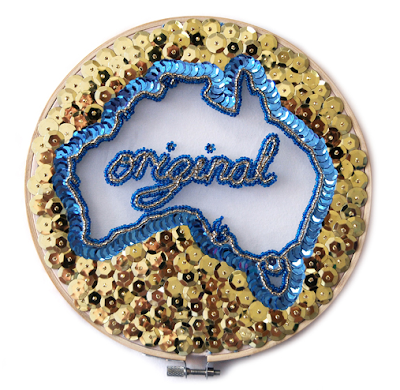 I'd been looking forward to seeing this show.  Some new work by Liam Benson in a double act with Lucas Grogan.  Even more interesting was that they were meant to be "borrowing from each other's visual language, aesthetic and experience".  I needed to head over to artereal just to check out what that meant. 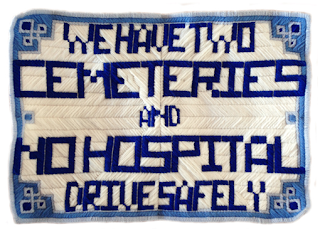 Regular readers will know that I have a bit of a soft spot for Liam's practice.  I love his exploration of the australian identity and especially his overuse of symbolic australiana like the coat of arms and native flowers.  He continues that theme here with a number of works.  My favourite was the hand beaded 'Original_2013' (pictured top).  This is reasonably small (20cm diameter) but with the gold sequins really packs a visual punch with the very recognisable map of Australia.  The 'original' is designed to get you thinking, which is what I like about works that incorporate text.  Is Liam referencing native Australian's (ab)original?  There is a separate piece in the show that explicitly does.  Is he identifying himself as an original?  Is he questioning the derivative US / UK nature of some of Australian culture? etc etc. Other similarly sized embroidery works include the words "new", "I know" and "thank you".  These were all great works and very competitively priced for those whose art budgets are nearly done by December so clever also in a merchandising sense! In addition to these Liam is working on a much larger map of Australia that depicts all the different tribes of aboriginal Australia.  Punters can come in and sew different coloured sequins into the different regions (I tweeted a photo of this, so follow @biglamington not to miss out!).  What I loved most about this piece is that artereal had listed this for institutional acquisition only!  Looks like it is time to start my own mona!  I'll see if I can't head back and get a shot of this work as it nears completion.  I hadn't seen Lucas Grogan back in Sydney since his former dealer (the infamous Iain Dawson) blew up and went underground.  Lucas is based in Melbourne (has his own website, yes) and is represented by galleries in Melbourne, Brisbane and even Adelaide so it is nice that he is having a guest spot in Sydney.  Some controversy over Lucas' use of aboriginal style caused two artists included in the Big Lamington collection (textaqueen and ryan presley) to quit some of those very same galleries in 2012 so it is interesting to see if that has had any impact on his style (there is a reference to this incident in the catalogue essay by Lisa Corsi).  I think it could be just that he is being more experimental here with some embroidered text works, which the gallery appropriately describe in the form of "off-beat-gay-bush-poetry", like his 'Sex, Drugs and Kylie Minogue'.  He does include a diptych called 'We was here (billabong / swimming pool)' which continues with his established style. 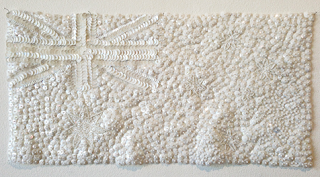 Points: The 3 points will go to Liam's original.  I really am a sucker for a good bit of Australiana and this one will be coming back to the Big Lamington HQ in the new year.  2 to the flag, which should be expected from someone with such an interest in vexillology.  1 point will go to Lucas' for his Branxton sign.  Like Lucas, I also grew up in the Hunter.  I like the quote by Matthew Johns when he was asked if he was a former Hunter boy (as he now lives in Sydney) and he responded that being from the Hunter is like being a maori, and you can't be a former maori.  So there it is, once a Hunter boy, always a Hunter boy.
Posted by Big Lamington at 9:21 PM No comments: