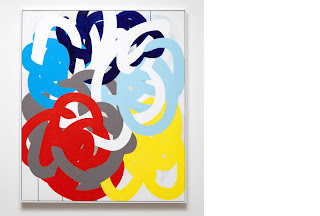 It is still group show seaon at Sarah Cottier. I like how she always puts a little spin on that format. The masculin / feminin theme sees the gallery's stable split into girls and boys. In a somewhat old fashioned sense the chicks get to go first and then the blokes will take over in late March. This was a quick visit as I always seem to get the raw end of the gallery / playground equation. My 4 year old was keen to pick out her favourites before heading up the road to the Dillon Street playground (which is much nicer since they removed that heritage fig from the Scottish Hospital). On to the points ...
Points: 3 for Sandra Selig's Behind your eyes. This is a pretty impressive string installation that a photo won't do it justice to, so swing by and check it out. I like the thought of a smaller version in the house but I bet it is a bugger to dust. We will give 2 for Gemma Smith's Tight Tangle (pictured), $10k and its yours. For budgetary reasons I'll have to make do with getting my daughter's version. The last point will go to Maria Cruz whose small set of geometric works caught our eye on the way out.
Posted by Big Lamington at 1:43 AM No comments: 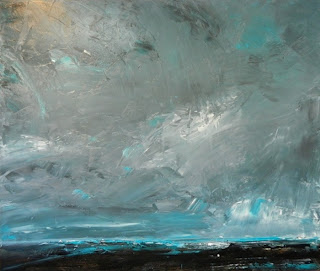 The Big Lamington team has planned a quick trip to Tassie so we thought a visit to Geoff's current show 'Recent Tasmanian Landscapes' would be good prep. My first thought was that the gallery had taken on the trappings of the music biz with a 'Geoff Dyer featuring Julia deVille' show. Julia's leather saddled and feathered ostrich skeleton still dominates the room (this got the points on our last visit). I suppose once installed it must be a bugger to move but still if I was Geoff I'd be wanting all the attention on my own stuff rather than the unmissable ostrich in the room.
On to Geoff's landscapes which are all quite abstract and certainly more bleak and gloomy than the Tasmanian tourist board would want to admit to (note to self, pack a weatherproof jacket). The big thing I noticed was the overpowering oil smell in the room. It seems like these were freshly painted. They are dry but Geoff uses a lot of paint on the canvas, I guess en masse the works emit an odour that a punter would hope wouldn't be replicated by just a single purchase. On the whole an interesting collection of works. I can't say Tasmanian geography is a strong suit so none of the place names resonated with me (except for Barnbougle towards Bass Strait) and it was very hard to pick a favourite.
Points. 3 to Barnbougle (pictured above), mainly because I want to play there. 2 to Midlands II and 1 to D'Entrecasteaux Near Cockle Creek. Now those few regular readers may recall we were big fans of Geoff's Archibald entry (MONA's David Walsh surrounded by meat) and I reckon a whole meat show would do the trick for his next Mick outing.
Posted by Big Lamington at 1:35 PM No comments: 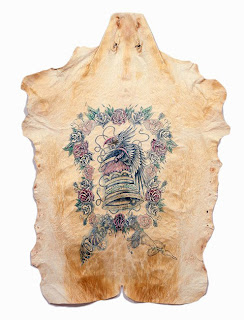 Wim Delvoye is the man of the moment with a big show down at MONA right, but until we can get down to Hobart the team will have to make do with Roslyn Oxley bringing the big names to Paddington. I really enjoyed this show, there was a little bit of everything - laser cut scale models, tattooed pigskins and some of his drawings.

The first thing you notice when you enter the room is undoubtedly the laser cut sculptures. These are made with laser cut steel that looks a little like what the meccano folks would have done if they had a gothic church to build. I was here with one of my junior art critics who absolutely loved the dump truck, at EUR 242k I was just hoping he wouldn't touch it! We continued 'just looking with our eyes' at the other sculptures. A 1:4 scale model concrete mixer (very bob the builder) and a 1:10 pergola. No red dots on these yet, maybe the punters are hoping the euro drops a little before this show closes on March 3. On to the pig skins. I thought this was the greatest concept on show today. I've read that he has a factory over in China where he gets the pig skin tats done as a German court decreed it was a little cruel! Yes folks he does ink these pigs whilst alive but they do get an anaesthetic which is probably better than what happens to the cattle we ship off to Indo ... Visually you can't escape the fact you are looking at the full hide here, you see the holes for the eyes, the nose, the hair on the skin. My only complaint is that I didn't really like the actual tattoos that much ('Liberty Bell' pictured above, hey Wim where is the crack in the bell?), but then I'm more of an old school Sailor Jerry tattoo fan myself. That said, at EUR 148.5k a throw I think I might have to look into getting a pirate version when I head over to China this year. For me the tattoo flash was a nice bit of filler but Wim's cheaper stuff is still EUR 18k+ so we made do with the postcard. Overall an impressive show that makes me want to get down to Hobart to see his other work (including the infamous Cloaca) soon.

Points. I'll let my 2 year old critic award the points today. I mean it as a compliment that the show appealed to us both! Obviously the 3 points will go to the 'Dump Truck', I agree it was a pretty amazing piece. I loved the tattooed pigskin concept but found it hard to find a favourite here. My colleague reckoned the 'Butterflies / Jesus Inside' was the top pick amongst the skins, 2 points. Finally, we'll give a point to the tattoo flash drawings, 'Untitled (tattoo drawing #1)' will get the 1 point as the judge liked the grey cherries and the orange flames.
Posted by Big Lamington at 2:50 AM No comments: 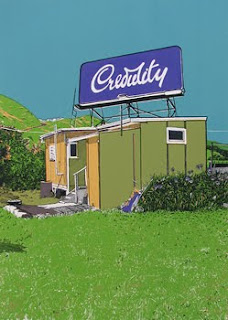 After stumbling upon Llankelly Place, and taking down a nice lunch at Wilbur's Place (highly recommended), the team checked out The Cross Art Projects space. Their current show, Occupy the Future, has work from four female artists of quite divergent practices. Who would Occupy the podium when the BL points are handed out?

First up was Mini Graff. She, not surprisingly based on her pseudonym, is a graffiti artist. I quite like some of the stuff that these style of artists do when they take the stencils off the wall and put them on paper (and would actually quite like to add a Ha-Ha Ned Kelly to the collection). The 3 prints on offer here were really nice and at $300 a pop for the silkscreen versions (and $75 for the poster version) would be adorning quite a few walls around town. It was hard to split my favourite here, Mini Graff has appropriated a lot of big company branding and the Cadbury / Credulity (pictured above) and Nestle / Naive were both strong. Sarah Goffman's piece great as a gallery installation but the assemblage of cardboard protest signs nailed to the wall raised some conservatorial questions that the 'price on application' may not have answered. Taken together the signs made a great visual piece and I am a fan of text but the anti Wall Street message didn't really appeal to this former US banker. Moving around the room Fiona MacDonald's watercolours of the Occupy protests were quite reserved. All single colour and quite washed out there was a lot of technique on display.

Points: 3 to Mini Graff's Roadhouse works (great title, we love the movie here) and 2 to Sarah Goffman's cardboard sign installation and 1 to Fiona MacDonald for her watercolours.
Posted by Big Lamington at 1:00 AM No comments: