Everything & Nothing at Sarah Cottier - 27 June 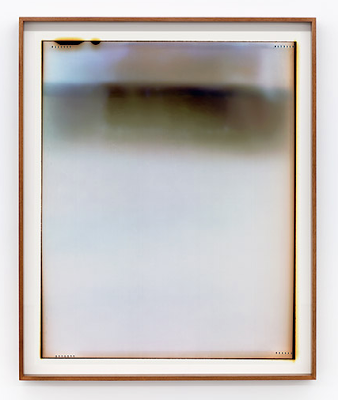 Everything and nothing.  Covers a lot of bases really.  Not sure where they were going with this here. Sadly, I only picked up the room sheet and not the essay so I am going to have to wing it ...

For starters it's a good old fashioned group show.  And this being Sarah Cottier it is at the edgier end of the conceptual / commercial spectrum.  The Mikala Dwyer plastic sculpture was interesting, looks good in the gallery but not sure how this see through work would go at home.  That said I'd fit this in more easily than the Tim Bruniges Piano, which is (naturally enough) upright piano sized.  Great to see someone up cycling an old piano - although I am interested that this P.O.A work is an edition of 3!  A firm family favourite (I had all the 3 junior critics with me) was Gemma Smith's 'Radiant Greige' (pictured above).  This was a small work, 34cm x 28cm, but packed quite a visual trick.  At eye level it is half grey / half pink.  Moving up, the work turns pink and moving down it goes grey.  I've tried to show that in the above snaps.  The kids initially didn't think much of it, being grey from their vantage.  But they did think it was cool as it changed colour, and I was kept very busy picking up junior critic after junior critic.  They also liked the Todd McMillan video work but that's the youtube generation for you.  I lean more old school, which means a nice big framed print will appeal to me - and Sarah Mosca has delivered a great abstract one called 'Gestural Ode' (pictured top). 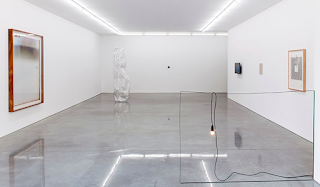 Points:  Gemma is going to take the 3 points here.  Radiant Greige was a family favourite, and I even learnt a new word (greige that is).  2 points for Sarah Mosca's massive 190cm x 155cm print.  Koji Ryui will take 1 point for the Spring sculpture - which was quite a nice little piece and it had a cool plinth.
Posted by Big Lamington at 5:00 AM No comments: 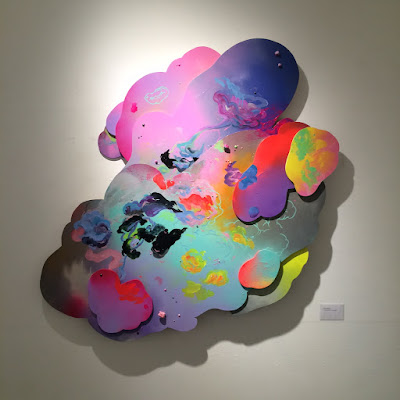 "Now in its 4th year, the Yen Staedtler Female Art Awards is back to bring you the best in homegrown female talent".  Well, with promo copy like that, who is the Big Lamington to resist saddling up again to see who is emerging in 2015 (you can click here for 2014 and 2013). 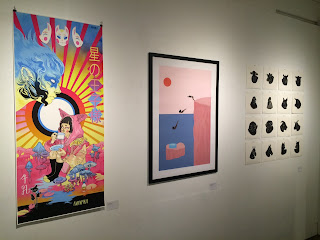 I missed the opening but thankfully the organisers were keeping the winner a big secret, seriously I had to google this after my visit, which meant I was able to pick my point winner without bias (ha!). On the whole, I didn't think this was as strong as the prior years, and I am not sure why that is.  The prize is fantastic for an emerging artist, you get a solo show at Gaffa as well as a feature in the magazine.  As well, the judges seem to favour the "serious" artists that have graduated from a top art school (last years winner was a BFA (Hons) and this years winner is doing her MFA).  I recognised Eliza Slater's work immediately.  Eliza had taken a point in the NAS graduate show last year and had entered the same work here, nice work being selected as a finalist (image above on the right).  I liked Miranda Lorikeet's name and her entry, 'Dive / Survive'  According to the bio she did this in her lunch break on MS-Paint.  Great to see some amateur's / hobbyists involved.  This work (image above, middle) was a little pixellated when printed out to 100 x 80cm, but that could have been on purpose.  I don't think it is a Yen art prize unless there is a bit of embroidery involved and I wasn't to be disappointed this year.  Annie Comelli has made the cut with a collection of works focusing on her vajayjay.  I liked the illustrator style of Anna Gareeva (image above on the left) and similarly the rough graphic design style of Nicola Mitchell.  A standout was Louise Zhang, who I recognise from Artereal.  Her colourful, abstract work 'and it came from Goo Lagoon' (pictured top) was also big (125 x 126cm) so really differentiated itself from the mostly figurative crowd. 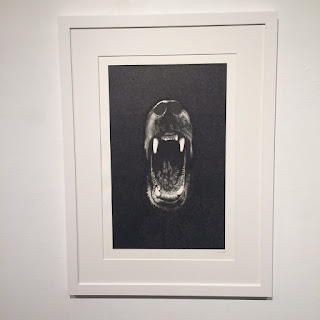 Points:   I am going to agree with the judges here and give 3 points for big and colourful.  Well done Louise.  Eliza is going to take the 2 points for her screen prints.  I will give one point to Annaliesa Horne for the North Sydney Bears inspired drawing (pictured above).  Always great to see some cross over between NSW Cup teams and the arts.  Also highly commended to the team from Yen for keeping this going.  And they do a handy little online publication where you can see all the finalists and get a bit more info, it's here.

Posted by Big Lamington at 5:30 AM No comments: 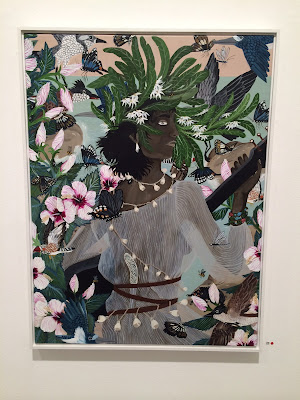 I've only noticed Leah Fraser over the last year, but I've really taken to her style (she got 2 points at the Blake Prize and 3 at a group show at the arthouse).  So I made a beeline back to the arthouse on Saturday when I saw she had a new solo show, Message from the World Invisible. 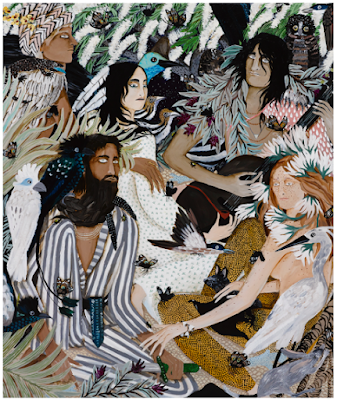 En masse, you are completely immersed in the fictitious world that Leah has developed.  And I liked it.  And it wasn't just me, as this show had sold out on opening night.  All women buyers too according to the gallerina.  I can see that, there is a strong Frankie magazine x Del Kathryn Barton vibe running through this show (Leah used to work for Del Kathryn Barton).  I particularly enjoyed the overuse of birds and flowers in these pieces.  Despite the naive style (the cockatoo and kookaburra's are particularly funky) you really get the sense that Leah has put deliberate thought into the different species to use, which I appreciated as a viewer trying to decipher the images. Native orchids, tropical plants, flowing hipster beards. These paintings had. it. all.  As in the recent group show, Leah has included a few interesting ceramic pieces.  I really liked the incorporation of the raw crystals / semi-precious gemstones into the pieces such as in 'Turn Your Body to Light Shaman' (pictured below). 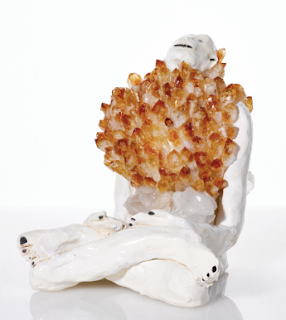 Points:  3 for the prolific hibiscus in 'My Heart Belongs to the Sea' (pictured top).  2 points for 'We Sang Songs beneath a web of Stars', and I will give 1 point for the spears of what looked like dendrobium speciosum in 'His Opal Hands Gathering You'.
Posted by Big Lamington at 3:44 AM No comments: 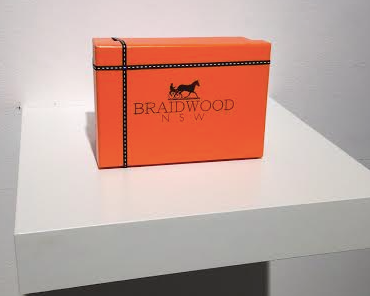 I haven't been to Gaffa for a little while, but the email newsletter piqued my interest last week.  Luxury packaging design rebranded with rural towns? Well that ticks a few of the Big Lamington's boxes so we nipped over during the week to learn more about Chris Twiney and his show 'Rural Gucci'. 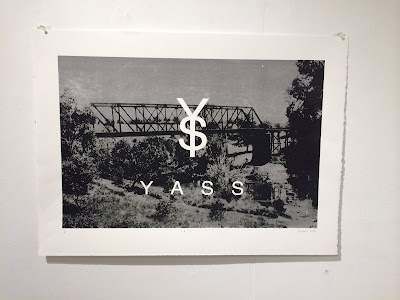 Turns out Chris Twiney is an emerging visual artist based in Sydney.  And according to his CV, this is his first solo show.  Even better he has a good little website so you can see more of his earlier work.  Chris is apparently using the luxury branding to highlight the widening economic divide between cities and rural towns in Australia.  I love the concept here, with its hints to Elmgren & Dragset's Prada Marfa and those t-shirts that say "London / New York / Paris / Moree". My only question is in regards the disparate towns presented. They are all over the map, literally.  Yass, Collector, Berrima, Braidwood, Hobrook (all NSW) and Glenrowan (VIC) are all within striking distance of an ANU arts student, I guess, but they're not on the same road trip.  If you were going for disadvantaged towns you could probably pick some better ones than Berrima.  And if you were being a little more collector friendly, you could have picked some better known towns as well!  I mean Holbrook?  Anyhow.  My favourite pieces involved the packaging, but then again I love the aesthetics over at the Dieline. Braidwood got the Hermes treatment (pictured top), Holbrook got the Tiffany blue box, and Collector got the Chanel white shopping bag.  The screen prints were good, again I liked Braidwood and also the YSL version of Yass (pictured above).  There was also a great photo were Chris had re-fashioned the sign at the entrance to Yass.  All in all a great debut solo show and I will be interested to see where Chris takes this theme. 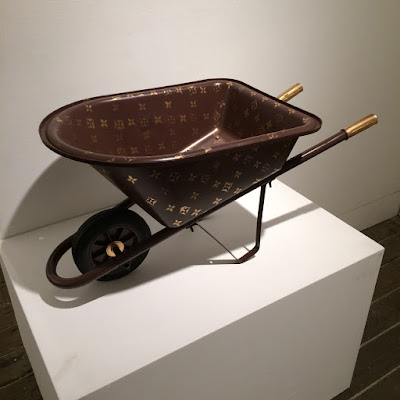 Points:  3 points to the Braidwood box.  2 points will go to one of the screen prints.  I probably liked Braidwood's the best again and while it is looking like I have a soft spot for this town, regular readers would know I'd prefer something from the Hunter or the Southern Highlands!  The 1 point will go to the LVMH wheelbarrow (above).  This didn't really question the economic plight of towns but was a nice fun inclusion to the luxury theme.  Great show.
Posted by Big Lamington at 12:16 AM 1 comment: