The National at Carriageworks - 25 June 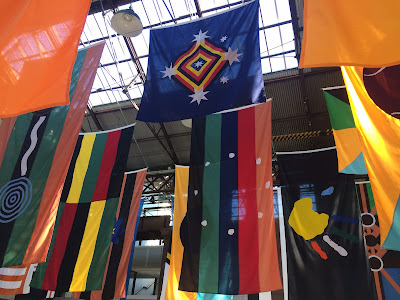 So I got picked by one of those friendly market researchers to do a survey about this show.  How did I hear about it?  Social media, and advertisements at bus shelters.  Those ads must have been around for a while, because this was the last day of The National at Carriageworks.  It's already red rover at the MCA so I'll tick the Meatloaf box when I get to the AGNSW later on ['cause 2 out of 3 ain't bad].

A few familiar names at this venue so I snuck in a last minute visit ... 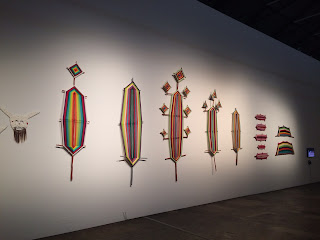 I think I gave this show a solid 7 out of 10 on the guest survey, and I would've recommended it to a friend.  That was on the back of some great new work from some Big Lamington regulars and a few solid debuts from a couple of folks to watch.  Oh, and of course a couple of head scratchers that make you wonder what all the hype is about.

As an amateur vexillologist I have loved Archie Moore's experiments with flags.  Finally I have got to see his United Neytions (2014-2017) in the flesh (pictured top).  In this version there were 28 flags.  The wall sign listed them "from left to right, front to back, the 28 nations are" .... as you could guess, it took a while but I had an inkling that the Kamilaroi flag would've rocked the diamond pattern (thanks Reko Rennie!) and it was the 13th I counted through so I could start linking nations with their flag.  It's a great idea and its been executed very well.  This I would like to see more of, and more at eye level.

Next up was a sawdust 'carpet' from another BL favourite, Claudia Nicholson.  She has shown these alfombras de aserrin down at Dark Mofo so it was great to see one for myself, All I have are dreams of you, 2017 (pictured below).  Like many things seen online and then in person I was actually shocked it was on the floor.  To be honest I had read very quickly and thought the glitter would be stuck to a board a la her Blake Prize entry.  I was also lucky enough to see the final performance art event with south american singers dancing all over it before the punters themselves finally churned it to pieces (yes, that is my RM below). 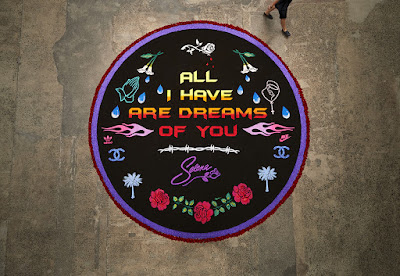 Other highlights included Alan Griffiths tribal dance artefacts (group shot pictured middle) and Karla Dickens embellished strait jackets were interesting.  Ramesh Nithiyendren had a massive installation work here, The Cave.  Time Out said his works "are the product of thoughtful study of - and irreverence towards - establishment values and aesthetics".  Which must just be another way of saying they look slapped together and messy, like as if Tom Polo did a ceramics course.  Aesthetics aside, one of my complaints about his neon ejaculator (below) was anatomic - where are the balls?  Surely a set of balls wouldn't have been that hard to add on?  It is one of the most common things drawn on school desks after all - maybe it is just that irreverent attitude to establishment values? 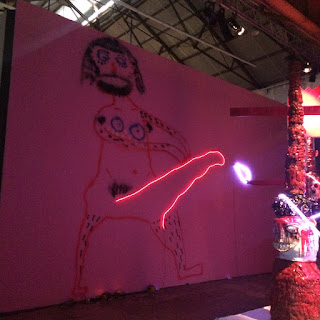 Points:  3 points for Archie Moore's flags.  This work is timeless and will be remembered.  2 points for Claudia's sawdust homage to Selena.  Whilst this ephemeral work has already been destroyed, I was very impressed and I've read that the video will live on at the other National sites.  1 point will go to Alan Griffiths for the woollen totems. 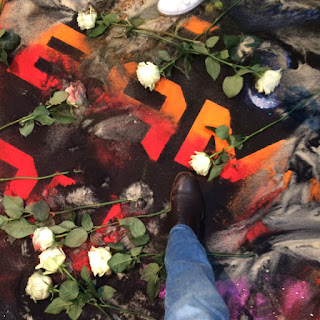 Posted by Big Lamington at 6:30 AM No comments:

Email ThisBlogThis!Share to TwitterShare to FacebookShare to Pinterest
Labels: Sydney public galleries and museums, The National

No.1 Neighbour at QAGOMA 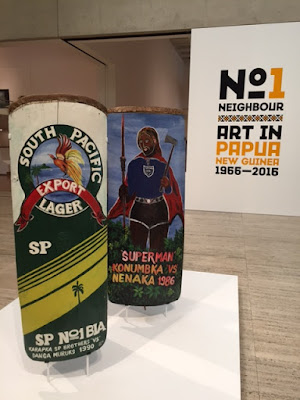 There was only one downside from checking out the show of Papuan art on at the Queensland Art Gallery when the Big Lamington was in Brisbane over summer.  And that was we might have seen our favourite show for 2017 by mid-January!! 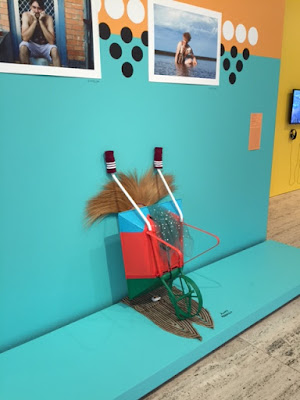 Yes, that's right kids I loved it.  The show itself was a bit of a survey, with artists from the 1960's, through to today.  Of course, for those that came in late, Papua New Guinea was once a colony of Australia, getting its independence in 1975.  I grew up hearing fascinating stories of the country as my own father had spent some time working there in the '60s.  You enter through this great lobby with a painted longhouse ceiling (pictured bottom) before going through the different eras in a counter-clockwise direction.  I loved the naive / self-taught style of the art which matched the Tok Pisin (Pidgin English) titles - some examples include Simon Gende's "No 1 Kiap Blong Australia Mr Jim Taylor I brukim bush long Highlands Papua Niugini" (or The first Australian Officer Mr Jim Taylor, in an exploratory mission in the Highlands of Papua New Guinea) or Mathias Kauage's "Man draivim elikopta" (Man flying a helicopter).  I also loved the folk art where folks had used brightly coloured yarn in place of traditional fibres for bags (pictured below) and also incorporated art onto traditional shields (pictured top).  Quite a lot of commercial themes seeped into this folk art, whether tribes were outright sponsored by SP Lager or whether they just enjoyed it wasn't entirely clear.  A Big Lamington favourite, Eric Bridgeman also made an appearance (pictured above) with his group of wheelbarrow shields "Kuman Pawa" (shield power) which take this symbol of the Highland identity and manhood (the shields) and tweak it ever so slightly.  To me, this is contemporary art done well.  The sincerity of the work really shines through, never mind that they would also look absolutely fabulous in my tiki bar! 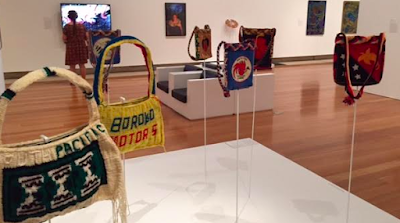 Points:  could be a first but the 3 goes to "Unidentified Artist" who did both the shields in the top photo (I am guessing that they are indeed separate artists but you get the point).  2 points to Eric Bridgeman, loved the upcycled shieldbarrows.  1 point to Sifas Morea for the Boroko Motors yarn bag (pictured above), turns out I am a sucker for naive product placement!  Highly commended to the folks who did the inside roof of the gallery, an amazing Tiki style extravaganza. 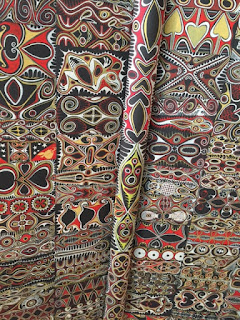 Posted by Big Lamington at 5:19 AM No comments: