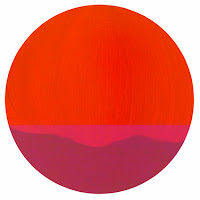 My main problem with Art Month in Sydney is that they have all these events stacked in one month and I can barely get to any - doesn't anyone else have a hectic job and a bagful of kids? I missed all the artist talks in Paddo this weekend, my one art outing on Saturday was to Tim Olsen to see the new shows by Brooke Fitzsimons and Melinda Harper. I was there just before Brooke's talk (I had to go vote!) so could only interpret the show based on the little blurb up front. Brooke's current practice is to collect printed images as references with she paints and then she builds colour up over them with thin glazes of oil paint "until an intense luminosity is achieved" ... the original images "become evanescent". Which roughly translated means they are mostly one colour with what looks like stains on them. I did like the idea though, and they were right down the fairway of what I consider emerging artist pricing (aka affordable). Points for the pricing strategy, ranging from $1,250 to $9,500 with about a third under $3,000, a third around the $4 - 5,000 and the balance north of $6,000. It worked - lots of red dots here. 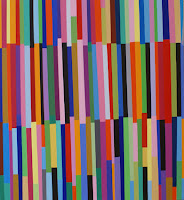 My heuristic of the least successful artist getting the upstairs treatment was called into question by Melinda Harper's show . The prices for these colourful works (which kind of reminded me of a bag of spilt lollies, see above) were a little higher but there were still some affordable options for those jonesing for a Harper. The smaller (under 50cm x 50cm) silk, thread and paint on embroidery works were selling for sub $2,000. The bigger oil on linen or canvas works started at $12,000 and went to $19,500. I can't really tell you which one I liked best as they are all called "Untitled". To me this really calls into question her commitment to contemporary art practice as naming a work is often the piece of art in itself!
Points, 3 for Brooke's 'Dip' (pictured top), 2 for 'Corner' and 1 point for Melinda's small embroidery works, #2 is probably the untitled I would've taken.
Posted by Big Lamington at 11:09 PM