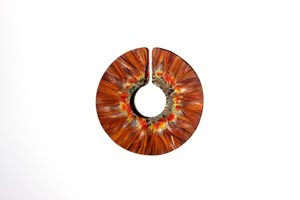 New Zealand art fair? This is the 'affordable' show in Wellington. The contemporary art fair with bigger prices (even in NZ dollars) is next week in Auckland. Wellington is a long way to go for some affordable art but as I was in town I decided to take the concierge up on his offer of a couple of complimentary tickets to the opening night ...


As you'd guess this was a real mixed bag. Luckily not really knowing any NZ artist I went in with less preconceived ideas than I usually do. One thing I found a little strange was their routine of taking down pieces that have sold and putting up new stuff. By the time I got their on the preview the main work that you can see on all the bus shelters around town had already gone - not to be seen. I liked a little bit of stuff on offer - mostly the work with overt kiwiana (I was effectively souvenir hunting after all). My top pick was Leonie Sharp, a contemporary maori artist that re-interprets traditional symbols. She had quite a lot of work with feathers (which instantly reminded me of some of the nice older chief blankets that you see framed in the posher offices of Auckland). These were all sub NZ500 so a good buy as well. Leonie was on hand to answer questions from the punters and has some interesting stories of where she gets all her feathers - basically if you come across any dead birds then send it to Leonie. I thought Antoinette Ratcliff's lightning bolts were pretty cool - these were about 30 - 40cm long mdf cutouts painted red. Again, souvenir worthy at NZ150. Other work that appealed came from Denise Wilkinson (a series of her photos was about NZ650), Janice Napper (her tikis were NZ1400), Gerry Copas (some text art - although political slogans are a funny thing to buy if you don't get the local politics) and Tony Harrington whose mixed media piece 'the whare that dad built' (NZ1900) appealed visually but also because whare was one of the few maori words I had just learnt (it means house, i think pronounced fa-ray, and all the hipsters call the warehouse, which is a kmart style store in NZ, the wa-ray fa-ray).


Points - 3 to Leonie. I even picked up my own Kaka Poria (similar to the one pictured above). She doesn't use native kiwi birds but introduced species like ducks and even australian parrots that are now pests in NZ. I thought the aussie pest was appropriate for me but ended up with one including blackbird and pheasant. It was pretty small - easily hand luggage (although those feathers may prove troublesome for customs!). Some contemporary gallery should pick her up and make her increase the size of her work by a factor of at least 20 - this would be striking on a large scale. 2 points for Tony's 'whare' and 1 point to Wellington's Suite Gallery for trying hard. They had scheduled the 'unaffordable art show' for their pop up space on Oriental Parade but instead have this note on the door that the piece they thought was unaffordable just sold for about NZ200k (looks like sales trump gags), but they did this in about a page with much more clever sounding words to make them look like they had less egg on their face - I am sure they are crying all the way to the bank! I'll be sure to check out their main digs a little later.
Posted by Big Lamington at 8:12 PM