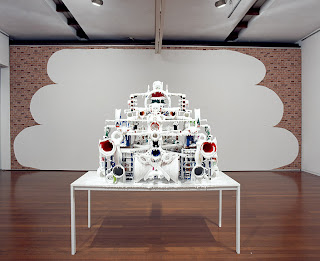 Taking advantage of a rare day off we strolled into RoslynOxley just after opening at 10am on a Thursday morning. With my junior art critic keeping unusually quiet we managed to spend a good 20 minutes in this gallery without encountering anyone. Surprising really as this show needed a little merchandising help by the looks.

Teppei Kaneuji has a pretty impressive resume. Apparently he is big in Japan. Then why only 1 red dot from the 30 works on display? Especially seeing this opened on 11 August and only has 3 days left. Probably a number of reasons. I'd speculate price is one of them, the big sculpture was $66k (pictured above) and even the smallest was $4k (the AUD hasn't been doing that well against the Yen, so maybe he gets these prices in Tokyo). I also think the work was a little 'hard' to collect. One example was the mirror works which ranged from $1500 to $3k and were basically the leftover parts of a sticker sheet put on ordinary mirrors. Excellent concept and definitely gives me a great craft idea for the junior art critics as we go through a mass of stickers on a weekly basis but it seemed quite cheap for the price asked. Another example were the sculptures of 'found objects' (aka trash) covered in resin. Lastly I wondered whether Sydney collectors were being a little parochial and saving their yen for Aussie talent? Of all the reasons I think this could be a big one. I am all for some international art on the walls (and there are a few Japanese artists in the big lamington collection, a small Yasumasa Morimura is with the framers right now) but with budgets being tight it is a pretty defensible option to take the Dick Smith route and be an art collecting protectionist.

Points: 3 for the big white discharge, or formally 'White Discharge (Built-up objects #15)' which is pictured above. If you are going to discharge then do it big. 2 for the teenage fan club #41 (I agree with whoever bought it, probably easiest sculpture to live with) and 1 to 'A Large Round Rice Cake Offered to the Gods (at New Year's)' mainly for the great name of the work, after all it was just brick wallpaper cut out in a blobby shape (can be seen in the background of the above photo). Also loved that it was dimensions variable, P.O.A. - when you are putting a $60k price take on a pile of found objects + resin you have to wonder what that might be!

Posted by Big Lamington at 6:31 AM