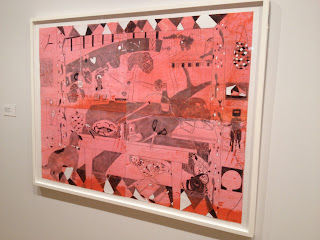 So let me get this straight.  The Trustees of the Dobell Foundation decided to axe the prize and instead run with an invitation only show every 2 years?  Way to disenfranchise young and emerging artists!  One of the great things about a prize is that it is open to anyone.  Hell, even I was considering having a crack (I have at least a week of NAS drawing instruction under my belt!).  Art prizes are just the way we do things in Australia, we like winners in sport and I think that goes the same for the arts.  So yes in summary I think it is a fucking terrible decision.  The Dobell Foundation Trustees had better put on one hell of a drawing event in two years time!

On to this years show (which is open until 10 February).  I am only just getting around to posting about this a few weeks late due to a hectic Christmas season so I have to consult my notes extensively.  I think this has moved around the floors of the AGNSW for the last 3 years but I did prefer to take the stairs up to the exhibition this year.  As per usual form I disagree with the judges decision.  Gareth Sansom's series of small drawings called 'Made in Wadeye' won the official comp, but to me this seemed more like a gong for lifetime achievement rather than the work in question. After much deliberation I think my Dobell for 2012 would've gone to Katherine Hattam's 'Heidegger's Hut' (pictured above, taken before I realised they actually have images on the intrawebs for about half the finalists this year, I have gone with mine as the colours on my iphone seem brighter).  Graham Fransella has quite a good watercolour entry this year, luckily for him there is still the Trustee's watercolour prize within the Wynne!  Quite a few other recognizable entries, like former winner Suzanne Archer and Wendy Sharpe's sketch for her recent show at King St gallery.  I always make a point of asking the guides what their favourite was and in this case the Pam Hallandal would've taken the points.  There is still time so go and see for yourself. 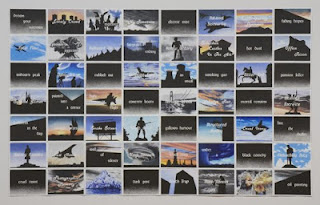 Points:  3 for Katherine Hattam.  2 points for Marinka Bozzec's 'Box Office Poison', (above, a series of small drawings. Marinka is also on flickr so you can see some of her other work).  1 point will go to Craig Waddell's 'You are the lightness in my dark' which for some reason isn't available on the AGNSW site but was a great drawing of waratahs which resonated with the state patriot in me.
Posted by Big Lamington at 2:43 PM