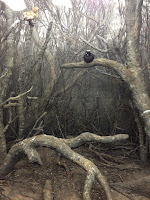 It's lucky I love snooping about artist studios as I had to schlep out to Marrickville for this one.  Not that I have anything against schlepping out to Marrickville its just that I would prefer if the MCA could've put this on a Saturday at about 2pm so we could nip off to Henson Park at 3pm for a Jets game!

I'd recently been exposed to Hayden Fowler's work courtesy of a trip to artereal.  Hayden is an NZ artist who is now based in Sydney.  And I like him even more now that I have discovered he also has a decent website (once again, every artist should).  He has what I would consider the stereotypical artist pad.  A little vintage, a little grunge and lots of older decorative kitsch artworks adorned the main space but I don't think anything could've prepared me for the studio area.  Here Hayden has built a creepy forest complete with chickens!  That's right folks these birds were right at home in the artist studio.  This big set is from his video work that he recently featured at artereal.  On first view it looked like it was filmed outside to me.  This set is quite a detailed piece of work (views above, on left with the chickens and on right you can see the rest of the studio, behind are concrete antlers).  As well as Hayden talking about his practice we had an assistant curator from the MCA give their 10 cents worth as well.  As an aside Hayden has 2 videos in their permanent collection, nice work.  It was a great discussion and Hayden didn't let the curator off the hook either after an earlier comment about finding his work "challenging".  How so?  Exactly.  I read it as a quasi dig as well but the curator recovered admirably.  Thats why they get paid the big bucks to chatter all knowingly about the arts kids!  It is hard to describe his work, it does deal with a kind of pastoral idyll but from a modern perspective where nature is on the back foot.  In a way his use of rare birds and images of extinct animals was kind of a memento mori for this viewer.  I was really interested to learn more about his fascination with animals, in particular birds.  Given I have a random collection of Gould League of Bird Lovers ephemera I think I have a new artist to put on my watch list.  Kindred spirits?  I was particularly drawn to the story of the Huia bird.  The feather of this bird was reserved for maori chiefs but one was given to the Duke of York (later King George V) which set off a European fashion for the feathers and voila the bird is extinct.  Tragic.  Hayden memorialised the bird in a performance where he got a tat of a pair of these birds (image below).  Apparently he is thinking about using birds in his next body of work as well.  I can't wait. 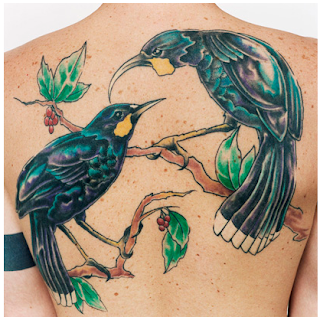 Points:  Traditionally the 3 points go to the artist on a studio visit and this is no different.  A great night, and really interesting to learn more about Hayden's evolving practice.  I am also fascinated by how many contemporary artists either have or are studying for PhD's.  Someone do some stats.  I will give two points for the tattoo of the huia birds.  Top stuff.  1 point must be shared by the roosting chickens which for the most part were quite well behaved.  Although I did see one take a crap on the set.  Lucky he is junking this shortly (although it does seem like a shame to tear all that work up).  That is the downside with working with animals.