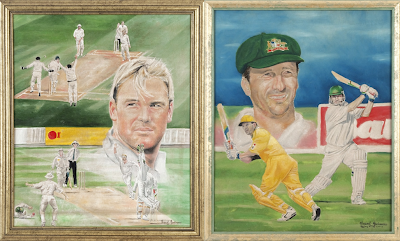 With the current Ashes series looking like it will end in a damp draw here's a little Ashes flashback to warm the hearts of any Aussie cricket fans out there, the greats Shane Warne and Steve Waugh.  And what about the artwork?  Painted by successful portrait artist Vincent Fantauzzo.  Vincent is a regular in the Archibald and has had some success (2 x People's Choice Winner, 1 x Packing Room Prize) and has also won the $$$ from the Doug Moran prize.  I can't say when these were painted but my guess is late '90s / early 00's.  'Where are they from?' I hear you ask.  Well they just happen to be a couple of new acquisitions to the Big Lamington collection!!  I never buy art at auctions (as I prefer to support the primary market and buy directly from the artist or a new gallery show) but I made an exception in this case.  These were recently offered at Leski which is where I endulge in my not so secret vice of collecting kitschy Australiana (I also have Craig McDermott's really skinny Ashes tie from '85 - a personal highlight).

I am not sure where these will go or what I will do with them.  I would love to maybe get another artist to do an 'intervention' a la Tony Albert or even Damien Hirst.  As an aside, everyone needs to read the story about how the Sunday Times restaurant critic AA Gill got his mate Hirst to paint a single red spot on a portrait of Joseph Stalin that Christies had refused to auction (they didn't auction Stalin or Hitler so they at least they were fair).  Sotheby's sold the work (originally bought for 200 quid) for over $200k with the proceeds going to charity.  For an image just google 'red nose stalin' or clink this link.

Posted by Big Lamington at 5:38 PM