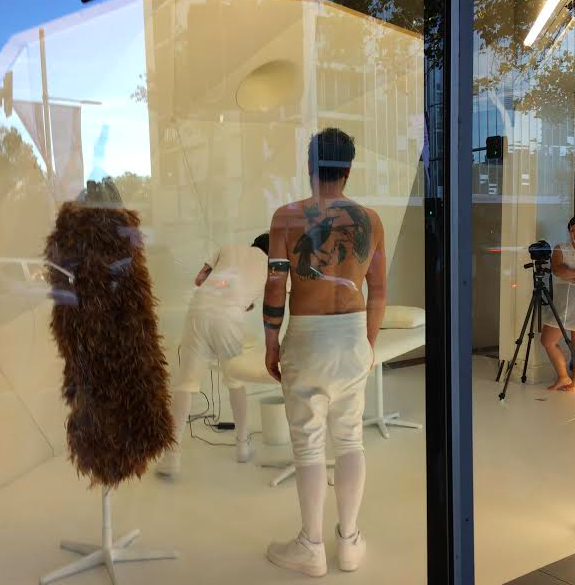 Some bonus art month action whilst walking back home.  I had been seeing this random erection going up at Alaska and was wondering what the deal was. A couple of Hayden Fowler sightings gave the game away and I was lucky enough to walk past here the first night of the performance.  If you've missed it so far, there is still time.  The final show is Sat 21 March from 6-9pm at the Alaska office on William St.  See you there! 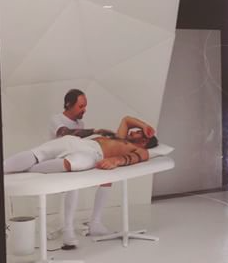 'Your Death' as this new performance installation project is called continues Hayden's practice of getting tattoos of dead birds as art.  Kind of like John Gould x Sailor Jerry.  He first got some huia birds inked in 2007 (we saw a print of these in his studio and they bagged 2 points back in 2013), then he got a massive swooping owl (or Wha'kau) in 2014.  And now?  And now it is the South Island Kokako.  Obviously a few different spellings and at first I was confused with the kakapo (which is a flightless parrot, and also quite endangered).  How do I know so much about NZ birds?  Well, Project Kakapo was the codename for a deal I worked on back in NZ back in the day.  Good times!  Anyhoo, so the Alaska blurb declares that the Kokako was officially declared extinct in 2004, and it was.  But in 2013 its status was reclassified as 'data deficient' and their are kiwis out there in the field looking for this bird!  [Go here if you want to donate to that cause]  What I love about Hayden's work is the contrast between the futuristic set / the clinical white costumes of the tattooist contrasted with the subject matter, extinct birds.  The maori style cloak made of feathers just sitting there for no reason is also pretty neat.  On the first night Alaska Director Seb Goldspink was stopping people and explaining the project.  It's a high foot traffic area so there were some punters getting their first dose of Fowler who were a little confused, my favourite was the group of irish construction workers who looked like they had a few tatts of their own.  They were fookin' amazed.  I reckon the junior critics would be as well.  I think we might have to swing by once more.  Oh, and I need some better photos!

Points:  tbd.  I want to see these new birds finished before I award the points.  It is going to take something special to get the 3 points off the huia birds!
Posted by Big Lamington at 3:12 AM