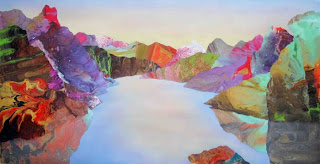 Alex's show continued from the pieces he had when I visited his studio with the young ambassadors - all flags of varying designs. The Mrs was really impressed with these works and unluckily for her the whole show was sold out prior to the opening. I sympathise with her as it is a common theme - you only ever want what has already sold. Our favourite was probably the flag that had the twist in it, some very skillful work in solid marble. I also liked the folded up flags that he does in honour of the Australian casualties of war (pictured on the studio visit post). Kate's current show looks like her last one but on steroids, in that everything is bigger. Smallest piece here clocks in at 60 x 120cm and the big boys are hitting the tape at 120 x 240cm. That is a lot of acrylic and resin so you are probably getting some value for money here. That said, I do think her style works on the small scale as a few of the leftovers from her last show in the stock room attest to. Great shows to drag the junior critics out to (marble being less fragile than the porcelain at the last show). Think the kids favourites were the colourful Kate Shaw's as she still goes for the odd bit of glitter although disappointingly none of these ones glow in the dark.
Points: I am going to give the 3 to Kate Shaw for Contro Natura (pictured). Really like her style but these pieces were too big to take home to ours, maybe we should frame the announcement card instead. 2 to the twisted marble flag. Also 1 point to Laith McGregor out of the stockroom (of which pieces seem to be on regular display given they now have a spare room for it) for Holy. It is permanent marker on a huge 2.5m x 2m blue poly tarp. I guess it could do double duty in an emergency if you broke the window.
Posted by Big Lamington at 7:33 PM