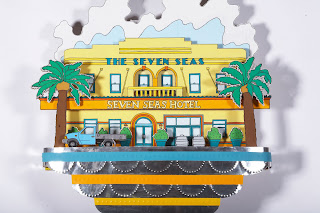 So I feel old coming to Artexpress.  Mainly because I am visiting during my lunch break and there are school groups everywhere.  This is always an interesting show and it too has now moved up to the top floor room where the last Dobell was.  This is on until 14 April so you've got plenty of time to swing by, oh and it is free so put that tenner back in your pocket. 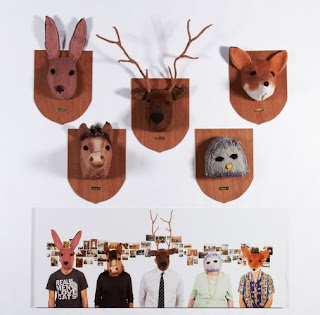 So what did I like?  Well I had forgotten my favourite thing about this show from last year and it was that all the student artists (well not all but most) list their artistic influences on the wall tag.  There were quite a few Salvador Dali's, Picasso, and even a Leonardo Da Vinci!  I think the cool kids rocked the no influences.  One of those cool kids was Francesca Fox.  Her work Vadallat (or wild animal, above) was  some hand masks based on her family's heritage which she then photographed.  I would've listed her influences as Polixeni Papapetrou.  Other favourites were Lochie Howard who had a suburban cardboard diorama (top, one of the scenes from 'love the home you're in').  I immediately thought Howard Arkley when I saw this and YES! he has him listed as a reference, go me.  He also had the Strutt Sisters listed and hey I had heard of them too, and knew they were from Newcastle and then picked the Seven Seas which is a real art deco pub in Carrington.  So maybe my Hunter Valley bias is showing a little bit but I was buying what Lachie was selling here - celebrating the good times, kitschy as they may be.  I suspected Milli Wheeler had Banksy as an influence and was not to be disappointed here, two nice collages.  My other favourite was a sculptural still like done in a flat pack cut out way (days of our still lives kit, below).  This was by Ella Sanderson who had listed all of 5 influences.  I do like a good vanitas (Hirst or the Phantom, I really don't care) and would've happily had this on a shelf in my pool room (although they are getting quite crowded). 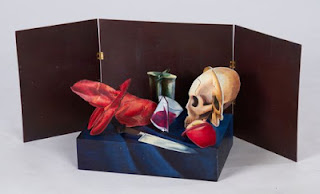 Points:  3 to Lochlan Howard; 2 to Francesca Fox and 1 to Ella.  Hope you all keep up the art no matter what course of study you pursue.
Posted by Big Lamington at 3:03 AM