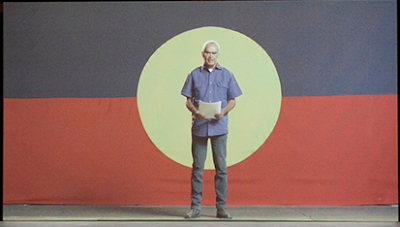 Fresh off a great hosting gig (of the NITV show Colour Theory) the activist who masquerades as an artist has a show in Sydney at the Artspace.  Bell's latest show is called "Imagining Victory" which is also the title of of his trilogy of politically charged videos.  I was here on the opening night for the artist talk and it was busier than standing room only!  The huge crowd that came out to hear Richard speak also made it hard for the average punter to hear any dialogue in the movies so I had to trek back across to Woolloomooloo this last Friday for another look see (and a hot dog de wheels from Harry's across the road). 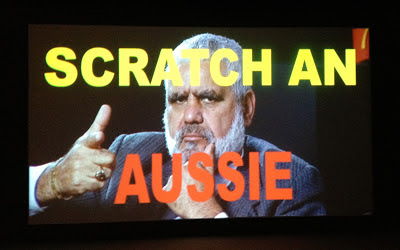 I think it is great that Artspace have got all of Richard's movies playing in different rooms.  It is kind of like catching up on a series of your favourite TV shows at once (if I was tech savvy enough to know how to download TV shows).  I started with 'Scratch an Aussie' (screen shot above).  This is from 2008 and cuts between Richard in therapy with Gary Foley and Richard as therapist with 4 blond Aussies (2 blokes and 2 chicks).   Next up was 'Broken English' (screen shot image at bottom).  This was done in 2009 and asks a lot of interesting questions about Aboriginal politics. I really liked the use of the chess sequence (again with Gary Foley).  It is pretty easy to see that Richard was playing chess with all those interviewed for this work. The re-enactment of the landing of the first fleet and the questions posed to random people on the street gave Bell lots to work with and I left this eager to see the final work. 'The Dinner Party' (screen shot, top) from 2010 completed the series and this imagines a future world where in some twist of fate China has bought Australia and given it to the Aboriginal people. In this video Gary Foley is now the President of the People's Republic of Australia and we are privy to a dinner party conversation in an upmarket Bris Vegas home of a serial art collector whose tastes are at the hyper end of the hyper-sexual scale. Given I'm contemplating a movie trilogy I am going to try really hard to work a Star Wars analogy in here. How about the Dinner Party has the republic winning. Spooky right? That 'winning' moment is the question posed by this show, what would a victory for the aboriginal people look like? Personally I can't answer that question but Richard's imagination at least provides a starting point.  And as Richard said on the night ...  "nothing ever happens without being imagined first". 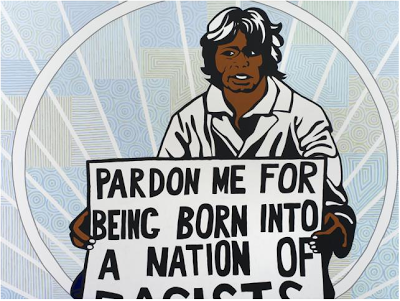 As well as videos Richard had four large canvasses on show.  If you love a bit of text in art then you won't be disappointed by these works.  Inspired by Liechtenstein pop art these are brightly coloured and for the most part pack a punch. I'm not sure I get the white girls can't hump piece. I know his t-shirt caused a bit of controversy back in the day but the joke is lost on me (maybe I've just been more fortunate than Richard in that sense?). I preferred the more straight forward protest piece 'Foley versus the Springboks' (above). I was vaguely aware of the protests against the Springbok tours (it did happen before I was born) and was forced to consult the wiki to learn more about this chapter in history. So in that sense the work was a great success, it got me thinking! On to the points ... 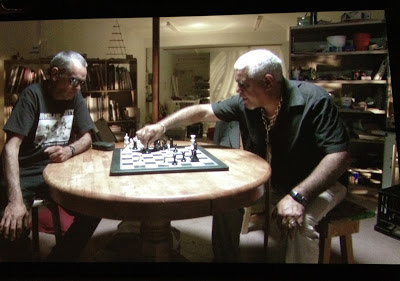 Points: 3 points for Broken English. To continue the Star Wars analogy this was my Empire Strikes Back, and I love that flick.  I also loved the ending, Bell screaming "Checkmate Motherfucker!" (above).  I will give 2 points for Scratch an Aussie. The Gold Coast meter maid inspired gold bikinis on the two Aussie chicks certainly didn't hurt in the overall assessment! I will give 1 point to a painting and as much as I love the Lichtensteinesque bedroom scene will give the 1 point for 'Foley versus the Springboks' as I do like some activism from this artist.

Posted by Big Lamington at 1:44 AM