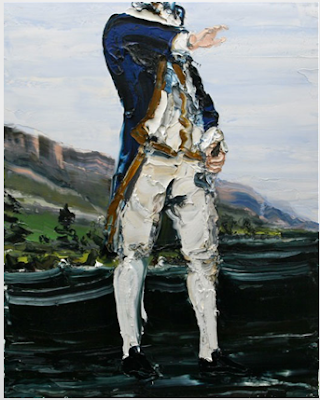 I am not sure whether it was boho elitism or scheduling naivety that saw the opening for the Paul Ryan and Luke Sciberras fall on the same night as the State of Origin decider.  I would hope the latter.  Despite this, there were quite a lot of punters willing to give up the chance to get a prime table at the London to check out the wares in these shows.  A topical sighting given the current Ashes series was former England captain Douglas Jardine (and I nearly punched him in the nose until I realised it was Hugo Weaving and he was only acting in Bodyline). 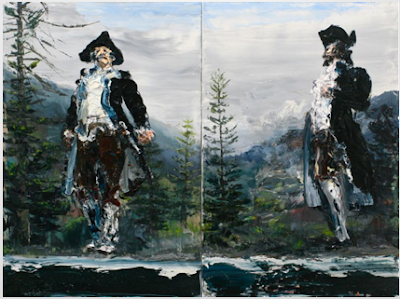 I think this is my first time back in the Jersey Road gallery since Olsen became OlsenIrwin.  I would've liked a bit more time for a browse but as I said, with kick-off looming I needed to prioritise.  I was here to see Paul Ryan's show so unfortunately merely passed through Luke's show on the way to the annex.  I have got to know Paul's work primarily through art prizes (his works in the last two Sulman's have been great, and he took home a Big Lamington point in 2012).  He also has the greatest artist statements I have ever read so it was a shame I didn't get to stalk talk to him here.  This show is called 'Wild Colonial Boys' on the web and the nice glossy catalogue but interestingly called 'Wild Young Cannibals' on the room sheet (maybe a slip from a gallerina recalling his Sulman entry 'Fine Young Cannibal?).  I think I prefer Colonials to Cannibals, and really enjoyed his depictions of Captain Cook especially.  The theme of colonialism is a recurring one in Australian contemporary art and you could make quite a collection just focusing on the depiction of Cook (Ben Quilty, Daniel Boyd, Jason Wing etc).  To me, these are nearly political works, calling into question the process of how colonialism took place (which, like Paul's painting style was not exactly neat and tidy).  Apart from people he does a great background scenery, really evocative of the wild Australian scrub landscape that is familiar to most Australians but was obviously quite foreign to the explorers of the day.  As well as the navy boys Ryan has also assembled a rag tag collection of other characters including a Drover, a Cowboy, a Trader and a Squatter (those were also the titles of the works).  These themed portraits were very strong and showcase his paint heavy technique (quite similar to Quilty in my opinion) really well.  Finally there were also some head shots of what looks to be his mates from the 'gong - modern day wild colonial boys.  A great show and one you should definitely get to if in Sydney, it is on until August 4. 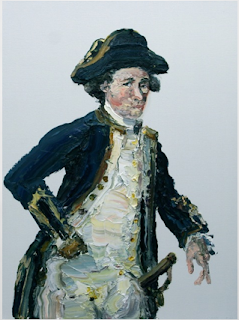 Points: I am a big fan of the Captain, I will give 3 points to 'Cook, is that a sword in your pocket' (above) and 2 points for 'Second coming of Cook' (top).  1 point will go to 'He Walked these hills in a long black coat' (middle).