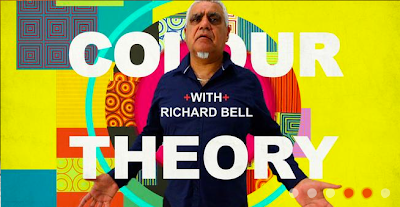 So far I think my favourite social media platform is twitter.  For those interested in the arts you can find out quite a lot that the mainstream media (and even the arts media) totally misses.  This was the case with Colour Theory, which is a new series on NITV.  Whilst I was familiar with the concept of NITV (it stands for National Indigenous Television and is one of the SBS free to air channels) I don't think I had watched it before last Sunday.

Colour Theory is hosted by Richard Bell and airs at 8pm.  It is a 30 minute show that focusses on a different artist each week.  I missed week 1 so only started with week 2 which covered Yhonnie Scarce.  I was familiar with her work before, especially the glass yams with the targets but I did learn quite a lot, not least of which how to pronounce her name which I had totally wrong!  Be sure to remember to tape it each week as my foxtel series link doesn't seem to work on NITV.  There are a few Big Lamington favourites coming up such as Reko Rennie (26 May), Archie Moore (2 June) and Tony Albert (16 June).

I'll come back and award the points at the end of the series.  So far Highly Commended's to NITV for commissioning this interesting series and Richard Bell for his great hosting, Richard also doesn't mind hamming it up for the cameras and I'd be willing to bet Tommy Waterhouse that his magnifying glass might make an appearance in each episode.
Posted by Big Lamington at 12:45 AM